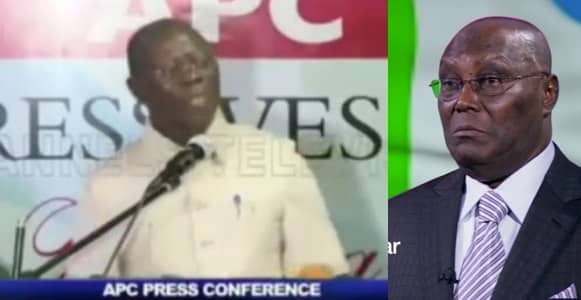 APC National Leader, Adams Oshiomhole, has said that PDP Presidential candidate, Atiku Abubakar, was never destined to be the president of Nigeria.

Speaking at a press conferenece in Abuja yesterday February 28th, Oshiomhole recounted how the former Vice President had attempted several times to win the ticket of different parties and failed.
”I think it also bothers on arrogance for Atiku Abubakar to suggest that our future is tied to his presidency. Atiku is destined never to be the president of Nigeria and I ask you to review his character because I keep speaking about character in the elections. Leadership is about character. Atiku’s desperation is so obvious, so desperate that in 2003, it is on record that he challenged his own boss President Olusegun Obasanjo not to do a second term and in the end they fought naked in Wuse market” he said
Watch the video of him speaking below;

Posted by mediacop
Email ThisBlogThis!Share to TwitterShare to Facebook
at 07:37