#NigeriaDecides2019: Tinubu reacts to allegations a Bullion van stashed with money was parked in Ikoyi home 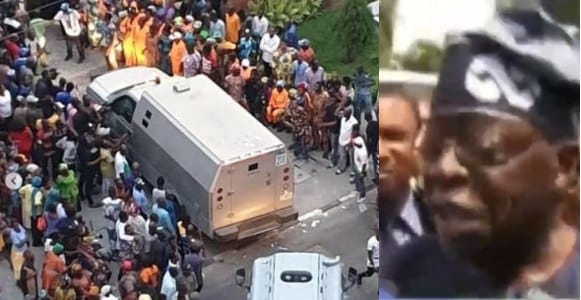 National leader of the All Progressive Congress, Bola Tinubu, has reacted to allegations of vote buying levelled against him.
Earlier today, a picture of a Bullion van exiting the Bourdillon, Lagos state home of APC National leader, Bola Tinubu, surfaced online. It was alleged that the Bullion van was stashed with money that was to be used to induce vote buying during the elections.

Speaking to newsmen after casting his vote, Tinubu said that the bullion vans coming out of his premises does not in any way signify that his party is plotting to rig the elections as some have speculated.
According to him, the bullion vans are not ballot papers and that even if they carry money, it is his legally earned funds and he can do with it as he wishes.
“I don’t work for the government, I am not in an agency of the government, and let anybody come out to say I have taken any contract from the government of President Buhari and the APC in the last five years. If I don’t represent any agency of government and I have money to spend if I like I give it to the people for free of charge as long as it is not to buy votes”. he said

Posted by mediacop
Email ThisBlogThis!Share to TwitterShare to Facebook
at 04:30