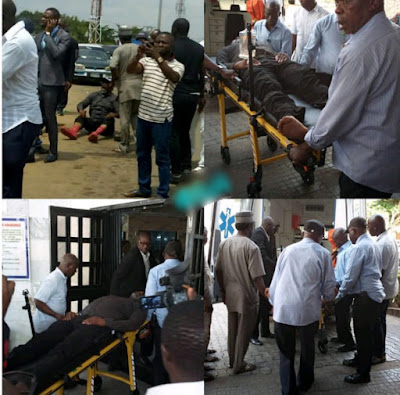 According to TheCable, Melaye was reportedly being led to court by the policemen on Tuesday afternoon when he attempted to escape thereby sustaining injuries when he jumped out of a moving police vehicle.
It was gathered that the police vehicle carrying Melaye turned to an unknown location when it got to Area 1, Abuja. He was said to have immediately jumped out of the vehicle.
Addressing journalists at the hospital including TheCable, an eyewitness simply identified as Peter said:
“I was there in Area 1 when the police vehicle stopped somewhere and amid the confusion, there were shouts of ‘shoot him, shoot him’.
“He has been saying it that they want to take his life and we can see that now. Yesterday, about 200 policemen were in house. They were there till this morning. When he came out, he told them ‘okay, I’m going to go with you people to the police station.’ That he is not a criminal and that they don’t even have any arrest warrant on him. But he followed them.
“It was later this afternoon, while he was being taken to court, around that Area 1, the crowd had gathered and the police officers were there with him. I don’t know if he was pushed out of the vehicle or not but amid the confusion, they later moved him from there.”

The police has now rearrested the senator, and in a statement to TheCable, said “hoodlums and miscreants in two Toyota hilux vehicles blocked the police vehicle” while Melaye was being taken to court. The statement read:
“At about 12pm of today (Tuesday), Sen. Dino Melaye while in lawful custody of the Nigeria police force and being taken for arraignment in federal high court, Lokoja from Abuja, escaped from lawful custody when hoodlums and miscreants in two Toyota hilux vehicles blocked the police vehicle conveying Senator Dino Melaye around Area 1 roundabout, Abuja and in the process the senator jumped out of the police vehicle through the window and was rescued from the police men by hoodlums and miscreants to an unknown destination.
“The police team re-enforced and trailed Senator Dino Melaye to Zankli Hospital, Abuja where he was re-arrested. The senator would be arraigned in court without further delay.
“Meanwhile, one of the Toyota hilux vehicles used by the hoodlums and miscreants in aiding the escape of the senator has been recovered by the police investigation team. The inspector general of police has therefore directed a thorough investigation into the circumstances leading to the rescue and escape of Senator Dino Melaye from lawful custody.”
The police is yet to take Melaye away from the hospital, as he’s still being treated.
Dino Melaye who is representing Kogi West District was arrested at the Nnamdi Azikwe International Airport, Abuja on Monday.
It is unclear what offence he was arrested for but the senator had been declared wanted by the police following the disappearance of some suspects who allegedly indicted him in a gunrunning case.
Melaye is yet to make any official statement through his Twitter page, on which he is usually very vocal.

Watch the video of him being rushed into the Zankili Medical Center, Mabuchi, today in Abuja.


Posted by mediacop
Email ThisBlogThis!Share to TwitterShare to Facebook
at 04:46