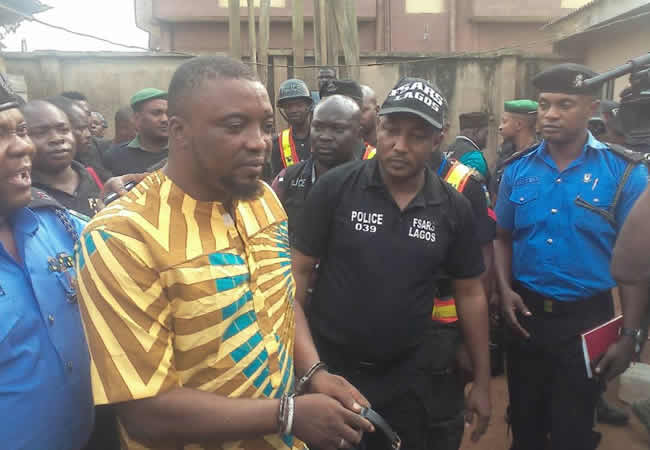 The Lagos State Police Command on Tuesday said it has arrested alleged herbalist working for the notorious murderous gang , Badoo . His name is given as Fatai Adebayo, alias Alese .

A press release signed and emailed to The PUNCH by the Police Public Relations Officer , Lagos State Police Command, SP Chike Oti , stated that the notorious activities of the cult group was prevalent in Ikorodu and Epe axis of the state .

It noted that through their activities , the group had murdered many people by smashing their victims ’ heads with mortar and pestle .

The release reads , “Adebayo , 34, who specialises in administering oath on members of the group before they launch any attack , was arrested at his shrine located in Imosan village , a suburb of Ijebu- Ode , Ogun State .

“ The arrest of the herbalist followed the arrest of some Badoo cult suspects at the weekend , including the overall head of the group .

“ Speaking while parading Adebayo before newsmen at the shrine , the State’ s Commissioner of Police , Mr. Imohimi Edgal , said the head of the group was arrested on water during an attempt to escape.

“ The CP, who led the operation involving the Commander of Rapid Response Squad, ACP Tunji Disu ; Chairman of Lagos State Special Task Force , SP Yinka Egbeyemi , among others, said investigation was still ongoing but that the full details about the arrests made so far would be disclosed on Thursday at a press briefing . ”

Continuing , the release added : “ Over the weekend , we had far reaching achievement in the fight against the killers popularly known as Badoo in Ikorodu .

“ Their kingpin who is the head of the group has been arrested . He was arrested on water as he was making his escape.

“ Revealing how the herbalist was arrested , Edgal said , ‘ One of the suspects arrested confessed and he led us here that before they go for any killing, the head of the group brings them to this gentleman (Adebayo ) to come and carry out oath for both themselves and the piece of stone they used for their killings and that they don’ t go for any killing without first of all coming for oath in this shrine and that is why we are here .

“This gentleman is an accomplice before the fact and so definitely we are placing him under arrest and as well as sealing off the shrine till after investigation .

“ I will give further details on Thursday during my press briefing but I can assure the good people of Ikorodu , Lagosians and Nigerians that we will not rest until this evil is completely rooted out from Lagos State, ’ Edgal assured.

“ The CP also made a brief stop-over at the palace of the traditional ruler of Imosan Village , Chief Tajudeen Muili to intimate him of the criminal activities going on in his domain.

“ At the shrine located at No 38 , Ayegbami Quarters in Imosan , which was later demolished by policemen, there were different charms and big stones said to be used for the illicit activities of the Badoo group . ”

Posted by mediacop
Email ThisBlogThis!Share to TwitterShare to Facebook
at 01:07