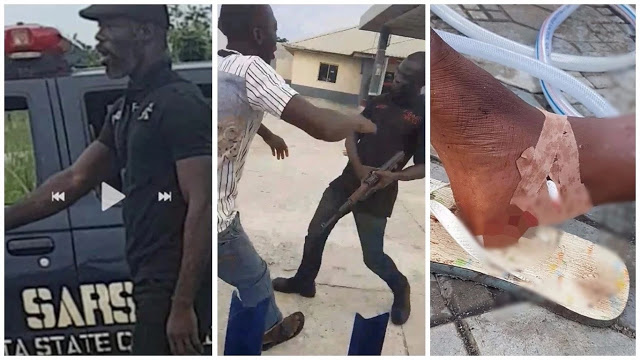 Ajaelu who took to his Facebook on Sunday, December 10, to give account of his encounter with SARS officers, said he and his co-travelers were robbed by the controversial police unit along the Asaba-Benin expressway.
SARS operatives are best known for harassing, intimidating and robbing innocent Nigerians
He wrote: I and my sports colleague travelling to Lagos for AG meeting of the Nigeria Cricket Federation was robbed by these so called SARS officers along Asaba to Benin expressway.
The CP of Edo should look into this matter and find this group of police officers who continue to disgrace the police force.
For 2hrs we were held hostage with handcuffs not minding that I identified myself as a commissioner in Imo state. Every money found on us and in our bags were taken, my wrist watch was taken, my pepper spray was taken, other valuables were taken too.
So many times during this ordeal guns were corked and we were told that they will shoot us dead and nothing will happen. Our phones were taken away from us, so that we can’t make any call, the place was so lonely and they forced us to park where their hidden car was parked.

A brown Camry written police by the two sides of it. From that point where we are, you will not see a passing car approach till it zooms past.

Ajaelu said when they were asked to go, he reminded the leader of the operatives that they had no other money on them.


According to him, the six started debating on how much they would give to them.
He continued: After about 10 minutes one brought 3,500 out of over 40,000 they took. As we were still with the one who brought the money, another officer came with an extra 1,500 and added. We were now been forced to drive off.
Even when we noticed that oil was dropping from our car and wanted to check. They refused and told us to go to somewhere else and do the repairs.
Ajaelu wondered that if as a public officer, he is subjected to such treatment, he can only imagine what innocent citizens are made to face from the SARS operatives.
He called on the Inspector General of Police to flush out the bad eggs in the Nigeria Police Force and bring sanity to the system.
Meanwhile, former vice president Alhaji Atiku Abubakar has called for investigations into allegations of harassment leveled against the SARS unit of the Nigeria Police Force.
In a statement issued in series of tweets on his verified Twitter handle on Sunday, December 3, Atiku, a former Nigeria Customs Service top chief, noted that the allegations must be taken seriously by the police and the National Assembly.


While urging the two institutions to look into the allegations, he saluted Nigerian youths who started the movement on social media to raise awareness about the allegations.

Posted by mediacop
Email ThisBlogThis!Share to TwitterShare to Facebook
at 12:40