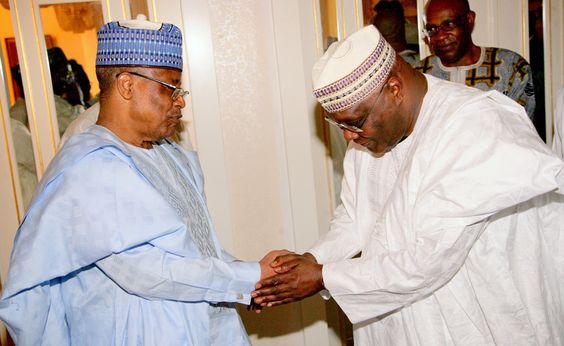 ​A former Vice President, Alhaji Atiku Abubakar yesterday shunned journalists and his supporters after meeting with a former military Head of State, Ibrahim Babangida in Mina, Niger State.
Atiku arrived and was met at the Airport by Niger State Deputy Governor, Alhaji Ahmed Ketso, and a team of PDP officials, led by the immediate past governor of the state, Dr. Muazu Babangida Aliyu; the state party chairman, Tanko Beji, among others.
The ex-Vice President then proceeded to greet scores of supporters who had been waiting to welcome him.


He immediately drove straight to IBB’s uphill mansion and on arrival, he was left alone with the former military leader, Babangida.


Atiku and Babangida stayed together for one and half hours in his sitting room.
Though none of the two men has disclosed what was discussed at the meeting, Vanguard reports that Atiku’s ambition was not well received by Gen. Babangida.
Babangida was said to have advised him to drop his presidential ambition.


The former Vice President came out of the meeting with a long face shunning anxious journalists who besieged him immediately, with his security men saying, “Please pave way; he is not ready to speak with you.”

Posted by mediacop
Email ThisBlogThis!Share to TwitterShare to Facebook
at 12:40