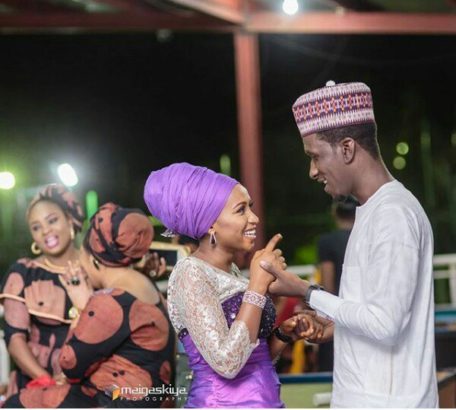 Yesterday, we were hit with report of the death of ex-PDP chairman’s son, Bilyamin Bello, who was reportedly stabbed to death by his wife for cheating, Maryam Sanda. Eyewitnesses who confirmed the incident, claimed that Sanda, daughter of embattled former Aso Savings Bank boss, Hajia Maimuna Aliyu, launched the attack on her husband over a text message on his phone.
Sanda allegedly stabbed her husband in the neck and chest while he slept in the bedroom of their home in Maitama, Abuja, and rushed him to hospital where he gave up the ghost. The eyewitness further disclosed that the suspect who has a daughter with her husband, had before the incident bitten off part of Bilyamin’s ear who treated it in a hospital before returning home.
Punch reports that Bilyamin, a real estate developer and businessman, who was planning to divorce his wife before he was allegedly murdered, had complained several times about his wife’s violent tendency to some family members and friends, and was reportedly advised to leave the house for some time but he refused.


“Maryam had attacked Bilyamin before the latest incident, which unfortunately led to his death. The two got married about two years ago when the former PDP chairman persuaded his son to marry Maryam. Everyone was shocked by Bilyamin’s death; it was sudden, unexpected and tragic,” a source said.


While the deceased have been buried, the case had been taken from the Maitama Divisional Police Station by the state command, as the Federal Capital Territory Police Command spokesman, Anjuguri Manzah, confirmed the arrest of a female suspect, adding that investigation had commenced into the homicide.
Here are photos of their wedding 2 years before his death;

Posted by mediacop
Email ThisBlogThis!Share to TwitterShare to Facebook
at 04:53