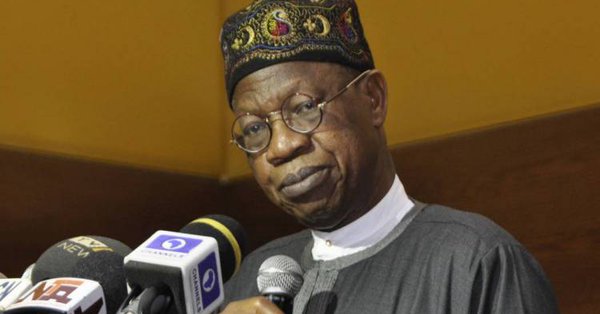 The Minister of Information and Culture, Alhaji Lai Mohammed, has said Buhari Administration has recorded laudable strides, despite a terrible economic downturn and an empty purse foisted on it by those who monumentally mismanaged the economy.
The Minister stated this in his remarks at the launch of a book chronicling the Administration’s achievements in Abuja on Thursday. He said: ”despite those who are daily trying to muddle the waters, this Administration has, through fidelity to discipline, determination and transparency, recorded landmark achievements that are putting our country on the path of sustainable growth.


”Taking a broad view, this Administration is delivering in the broad areas that form the plank of its policies: Security, fight against corruption and the economy, which includes the massive provision of infrastructure, ease of doing business and agriculture, just to mention a few.” Alhaji Mohammed said the Administration has successfully tackled the menace of Boko Haram, which had crippled the North-east and even put the residents of the Federal Capital Territory on tenterhooks, following attacks on the UN Complex, the police headquarters and crowded motor parks, all in the FCT. He reeled out the Administration’s achievements in several sectors, including power where generation has increased from 2,690MW on 29 May 2015 to 6,619MW; transmission capacity from 5,000MW to 6,700MW and distribution capacity from 4,000MW to 4,600MW as at September 2017.


On Infrastructure, the Minister said the Administration has increased, many times over, the budget allocated to roads (from 18 billion to 198.25 billion Naira), power (from 5 billion to 91.2 billion Naira) and housing (from 1.8 billion to 71.559 billion Naira), hence was able to construct or rehabilitate a total of 766 kilometres of roads across the country in 2017. On the economy, he said headline inflation has fallen for nine consecutive months this year and that foreign reserves are up to $34 billion, from $24 billion a year ago. ”Nigeria is out of recession and the economy is on the growth trajectory again, after the economy contracted for five consecutive quarters. Despite the downturn in oil prices, this Administration was able to invest an unprecedented sum of over 1.2 trillion Naira in capital projects through the 2016 Budget, the highest ever in the history of this country.
”Our Sovereign Wealth Fund, which was established in 2011 with US$1 billion, did not receive additional investment for 4 years when oil prices were as high as US$120 per barrel. This Administration was able to invest an additional US$500 million into the Fund,” Alhaji Mohammed said. Listing other achievements in the economic sector, he said stability has been restored to the foreign exchange market, the recent 24-place leap by Nigeria in the World Ease of Doing Business Index and the rehabilitation of 15 moribund Fertilizer Blending Plants across Nigeria, which has created 50,000 direct jobs and 70,000 indirect jobs? The Minister said the Administration’s war against corruption is moving apace, adding: “Never before, in our history, have so many people being hauled before the courts to account for their alleged roles in the unprecedented looting of our commonwealth.
Corruption is no longer possible on the table. It has been driven under, with those still engaged constantly being made to watch their backs.” He also reeled out figures to support his claim that the Administration’s Social Investment Programme ”is a roaring success’.


”Over 4.5 million pupils in public schools are being fed under the School Feeding programme; Over 200,000 unemployed graduates have been employed under the N-Power Scheme. Over 250,000 enterprises have benefited from the sum of 12.5 billion Naira, which has been disbursed to entrepreneurs to expand their businesses and over 110,000 households are currently benefiting from the Conditional Cash Transfer programme across the country,” said the minister.

Posted by mediacop
Labels: news
Email ThisBlogThis!Share to TwitterShare to Facebook
at 08:04