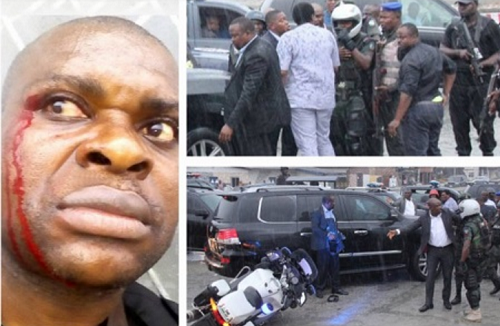 It was a horrifying scene yesterday afternoon in Port Harcourt, as policemen attached to Governor Nyesom Wike and that of the Transportation Minister, Rotimi Amaechi, clashed.
Amaechi’s escort details were, however, unlucky during the 3p.m. attack, as one of them, Sgt. Eteng Ewelu, was battered, with blood on his face, while the AK-47 rifle of Sgt. Princewill Ubaji was snatched, while being forcibly disarmed, with the rifle taken away by the Rivers governor’s convoy.
Wike, through his Special Assistant on Electronic Media, Simeon Nwakaudu, in his reaction, however, claimed that personnel of the Federal Special Anti-Robbery Squad (F-SARS) and soldiers attached to the minister of transportation attacked his convoy, while allegedly attempting to assassinate him.

But Chibuike Rotimi Amaechi Media Office in a statement yesterday said, “In a blatant show of naked raw power, Minister of Transportation, Chibuike Rotimi Amaechi this (yesterday) afternoon narrowly escaped being shot by security men attached to the Governor of Rivers State, Nyesom Wike.  His car wasn’t that lucky though. The car was vandalized with a broken side mirror.”
Report of the sad incident was immediately lodged at the State Criminal Investigation Department (SCID) of the Rivers Police Command, headed by Zaki Ahmed, while Ubaji’s rifle had not been recovered, with Ewelu and other injured policemen still receiving treatment in undisclosed hospitals in Port Harcourt, as at press time.


It was exclusively gathered yesterday evening in Port Harcourt through a top security source, who would not want to be named, that the unfortunate incident heightened tension in the area, with passersby, motorists, other road users and persons in the neighbourhood scampering to safety, to avoid being hit by stray bullets in the confusion.

The security source said: “Today, November 11, 2017 (yesterday) at 3 p.m., the Transportation Minister, who was driving from the Port Harcourt International Airport, Omagwa, in company with police escorts, got his convoy intercepted by the Rivers governor (Wike) at Trans-Amadi Industrial Layout by Nkpogu in Port Harcourt. The security details managed to ferry  Chibuike Rotimi Amaechi to safety, after which the Rivers governor led his Chief Security Officer (CSO), Promise Wosu, a Superintendent of Police (SP), and about ten mobile policemen, to attack his predecessor/benefactor’s convoy.

Posted by mediacop
Email ThisBlogThis!Share to TwitterShare to Facebook
at 23:59