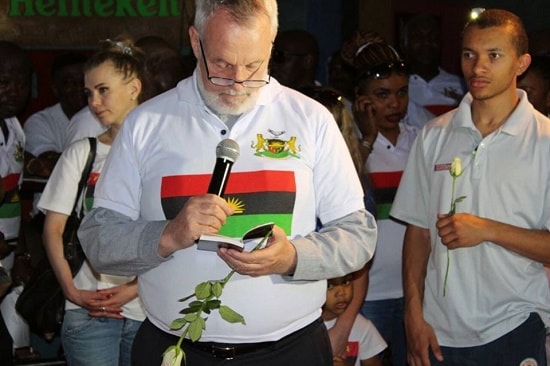 As the agitation continues for the actualization for the sovereign state of Biafra by the Indigenous People of Biafra (IPOB) and other various pro-Biafra groups, the date and time for Biafra referendum has been finally released by Biafra Nations Youth League, BNYL, on Wednesday when the activities for Biafra referendum actually started.
The pro-Biafra group said the ongoing referendum in communities and local government areas in the South South has recorded a huge success.
.
This was disclosed in a statement by leader of the group, Princewill Obuka saying, “We didn’t start grassroots engagement of recent, that is why we used the word ‘commencement’.
“A lot of people see us as new Organization, but we are not, we have been in existence since 2013, one could imagine the level we might have gone underground.

“Our community mobilisation for referendum has started for long and peaceful, we officially flagged off the referendum programs in Emohua, in Rivers State, the videos are there on our YouTube channel, we have been on low key, doing what we know best unannounced.


Gone are the days for divide and rule tactics of the federal government, if their motives is to stop us from bringing our people and communities together they will fail, because we have gone too far beyond their imagination”.
Obuka also noted that the group remains peaceful and in-line with United Nations, UN, declarations.
He further stated that,  “Biafra independence does not necessarily require or lies with referendum from the government to be free”, adding that the massive demonstration organized by the indigenous people of Biafra, IPOB, in the past is the best referendum.
“All we need now is UN and foreign countries to lift our flag, but that, they will do when they see coalition and the needed unity in us,” he said.
The group also dismissed the meeting between Ohanaeze and UN officials in Enugu which resolved in favor of a united Nigeria.
“Ohanaeze is an Igbo group, the fact they claim to be the political mouthpiece of the Igbo does not mean that they represent Biafra.
“That group don’t speak for me and we don’t consider the meeting as anything serious.


“If the person who claimed to be sent by UN Secretary General made the comments that violates our rights to exist, I think he should be sanctioned for going against the UN charter,” the statement added.

Posted by mediacop
Email ThisBlogThis!Share to TwitterShare to Facebook
at 06:45