Menu
Home » »Unlabelled » 2019 election: Even if my son is picked as party chairman, I will still contest – Fayose tells PDP

2019 election: Even if my son is picked as party chairman, I will still contest – Fayose tells PDP 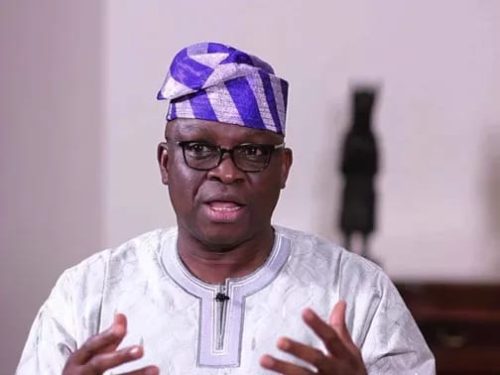 The governor of Ekiti State, Ayodele Fayose has declared that even if the Peoples Democratic Party, PDP picks his son as national chairman, he will still contest for presidency come 2019.
Fayose said nothing can stop him from contesting 2019 election.
The Governor, who declared that he will win Nigeria’s number one seat, added that, “Nothing can stop him from contesting the 2019 election.”


Fayose recalled that during Aminu Tambuwal speakership, the post was zoned to the South West but because we lost it, a zone got the two top appointments in the land.


He said, “It is the Presidency that orders things.
“When I become President in 2019, I will reorder those things. Nothing can stop me from contesting,” he told Vanguard.

Posted by mediacop
Email ThisBlogThis!Share to TwitterShare to Facebook
at 07:58