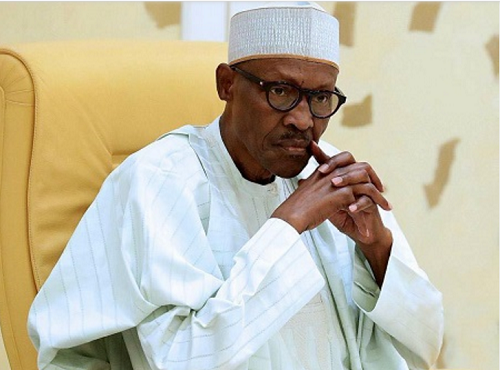 President Muhammadu Buhari has thrown an open challenge to his All Progressives Congress, APC, to free the space for other leaders of the ruling party who are eyeing his seat in the 2019 contest. Former Vice President Atiku Abubakar leads the pack of APC chieftains who have shown interest in the next presidential election.
Exclusive details of discussions at the Tuesday’s National Executive Committee, NEC, meeting of APC obtained by Saturday Sun from three prominent members of the party’s National Working Committee, NWC, who attended the meeting, show that the President threw the challenge soon after the well attended NEC meeting kicked off and motions were being moved for consideration by party leaders.

According to the details, the motion seeking an automatic second term ticket for Buhari was the first at the meeting and it was moved by a party chieftain from the North, simply identified as Alhaji Nosiru. Former Zamfara state governor, Senator Ahmad Sani Yerima, seconded the motion. At that point, it was gathered, some state party chairmen at the back of the hall were shouting ‘No vacancy in Aso Rock.’ President Buhari then raised his two hands and pleaded that the motion be stepped down to avoid closing the space for other aspirants who may be nursing presidential ambition on the platform of the party. “President Buhari intervened after the motion was moved and seconded. He said there will be no need for that because he didn’t want the democratic space closed. He said ‘let’s allow others to contest, that’s the beauty of democracy.’
“It was after the President’s intervention that Imo state governor, Owelle Rochas Okorocha in his capacity as the Chairman of the Progressive Governors Forum moved the second motion seeking to pass a vote of confidence on Buhari and the party’s leadership. Okorocha assured the President that while moving his motion that all the APC governors were ready to go to any length with Buhari and that he can rest assured they will give his aspiration full support and en-bloc”, a party leader from the Northwest who is also a member of national caucus of the APC stated.


The presidency has also confirmed this account of what transpired at the NEC meeting. A similar narration was given by the Special Adviser to the President on Media and Publicity, Mr Femi Adesina in his article at the back page of this edition of Saturday Sun


According to the presidential spokesman, “The National Executive Committee (NEC) meeting of the All Progressives Congress (APC) held at the party’s secretariat in Abuja on Tuesday. I was there. The atmosphere was friendly, almost convivial. At a point, someone moved a motion of confidence in the Buhari administration. The seconder, a former state governor, added to the motion, seeking an endorsement of the President as candidate for second term in 2019. As he raised the motion, I saw the President gesturing, with his two palms downwards. The gesture meant, please, cool down, not now. This is premature. And the National Chairman, Chief John Odigie-Oyegun, weighed in, accepting the motion of confidence, and deferring the one on automatic candidacy. Everyone was satisfied.”
While stating that what a section of the media reported about discussions at the meeting was largely inaccurate, Adesina said rather than governors shooting down the motion for a second term, it was Buhari who rejected the offer, stressing that “it was the President himself who had dissuaded those who made the move, by his gesture.”
Preparations for President Buhari’s second term bid went into full swing last weekend when his close allies opened a secretariat for the Buhari Support Organisation, BSO in Abuja from where the re-election campaign activities of the President will be coordinated.
Meanwhile, former Vice President, Atiku Abubakar has said that only Nigerians will determine his fate because of his interest in acts that will help deepen democracy in the country. The ex-VP’s spokesman, Mr Paul Ibe said his boss stands with Nigerians on whatever that will make the country and her democracy better.
Another of Atiku’s aides who pleaded anonymity claimed that reports so far about Atiku contesting the 2019 presidency are mere speculations. He argued that the former VP has processes he follows each time he wants to go for elections stressing that he was yet to activate any of the processes.
Asked to name such steps, the aide said Atiku must seek the face of God, consult his family and meet with key political associates and friends before seeking elections. So far, he said the politician was yet to take any of the steps.
He however challenged President Muhammadu Buhari to publicly declare that he would want an open contest for the ticket of APC instead of speaking through his aides.

Posted by mediacop
Email ThisBlogThis!Share to TwitterShare to Facebook
at 07:58