Menu
Home » news » “Withdraw Your Support For IPOB Within 72 Hours” – Lawyers, Others Tell US As They March To Embassy.

“Withdraw Your Support For IPOB Within 72 Hours” – Lawyers, Others Tell US As They March To Embassy.

In what seem to be a an unexpected trail of events, some lawyers and human rights activists have stormed the U.S Embassy in protest of the government’s remarks on Nigeria’s proscription of the Indigenous People of Biafra (IPOB).
The protesters. 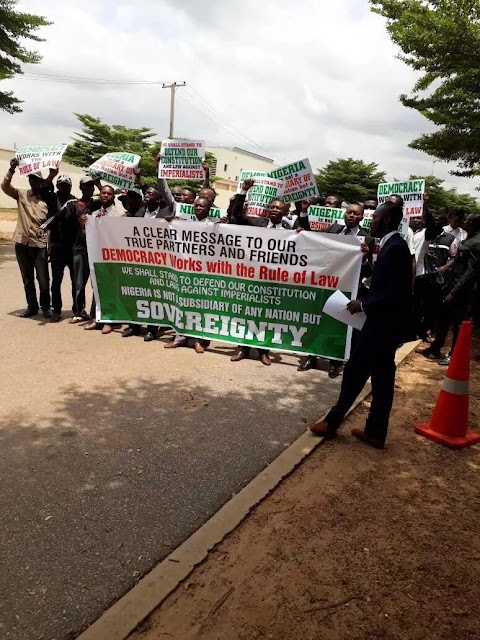 The protesters under the aegis of League of African Democratic Lawyers (LADL) said the US is working towards destabilizing Nigeria’s democracy by openly supporting secessionists agitations led by IPOB leader, Nnamdi Kanu.


The Lawyers led by LADL country representatives, John Oboh, in a letter

He said the lawyers and human rights activists will be forced to carry out civil disobedience in tandem with democratic practices if the support for IPOB by the US is not withdrawn within 72 hours.
“Considering that the recognition of IPOB will simultaneously reignite all these separatist movements while encouraging even the politically oriented ones among them to turn violent, the various international organizations are not equipped to deal with continent-wide pockets of violent insurrections that will result.
“The remaining stable countries of the world must then be prepared to host the portion of Africa’s 1.2 billion people that will pour over their borders,” Oboh said.


Oboh added that Kanu and other leaders of the commanders have repeatedly insisted on “referendum or violent breakup of Nigeria.”

Posted by mediacop
Labels: news
Email ThisBlogThis!Share to TwitterShare to Facebook
at 09:53