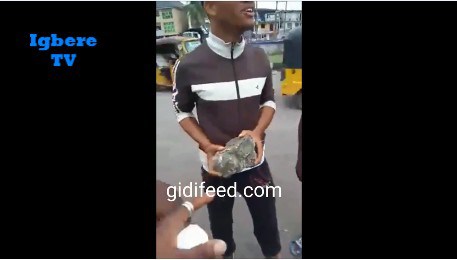 According to an eyewitness:
Governor Rochas Okorocha on Monday was ‘stoned’ by angry residents on the streets of Imo as his convoy passed through Wedral road by Fire Service Roundabout in Owerri.
In a video that emerged online, Imorite were seen throwing stones and abusing the governor for his nonchalant attitude towards the plight of the people, while at the same time, erecting Zuma’s statue.
Governor Rochas who has erected Zuma statue with other un unveil statue has been under criticisms and has been instructed by United Labour Congress of Nigeria (ULC) to apologize to citizens of the state for disgracing them.

Governor Okorocha has also declared he would unveil more statues in Owerri, in the state capital.

Posted by mediacop
Labels: news
Email ThisBlogThis!Share to TwitterShare to Facebook
at 09:11