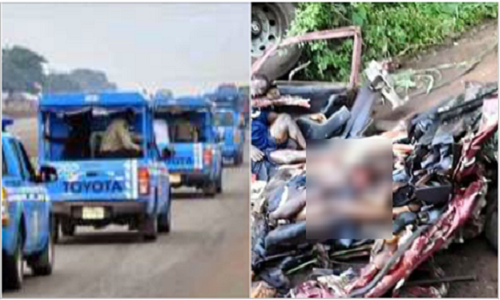 Eight passengers were killed in an auto crash in Delta State while an official of the Federal Road Safety Corps was crushed to death at the foot of the Niger Bridge in Onitsha, Anambra State on Tuesday.
The Delta State auto crash involved a commercial bus which crashed into the Itakpe-Aladja railway line while crossing a bridge near Agbor killing the eight passengers while seven others sustained life-threatening injuries.
Giving details of the accident, an eyewitness said the deceased included six males and two females while a toddler was among the seven victims who sustained varying degrees of injury.
According to Punch, the source added that the driver of the bus with registration number BMA 524 XA lost control while crossing the bridge resulting in the fatal crash.
The commercial bus was said to be heading towards Asaba when the accident occurred.

It was learnt that officials of the FRSC joined other sympathisers to rescue the injured victims, who were rushed to a private clinic for medical attention while the corpses of the deceased were deposited at a mortuary in Agbor.
The Delta State Sector Commander of the FRSC, Mr. Rindom Kumven, confirmed the accident to The PUNCH when contacted on Tuesday.

He said the injured had been rushed to the hospital.
The Anambra State accident happened when a commercial bus driver who was identified by the police as Obiekezie Okonkwo lost control and crushed an officer of the FRSC to death.


Okonkwo is now in police custody at the Fegge Divisional Headquarters, Onitsha.
Okonkwo was driving a Toyota Hiace with Registration No. ATN 466 ZK when he  allegedly lost control of the vehicle as a result of brake failure and knocked down the 32-year-old FRSC official, Ojukwu Noble.
A source, who pleaded anonymity, said the accident occurred at the foot of the Niger Bridge in the Onitsha .
He said, “Efforts to revive Ojukwu at a nearby hospital proved abortive as the medical experts confirmed him dead, few hours after he was rushed to the hospital.”
Confirming the incident, the Divisional Police Officer at Fegge, Rabiu Garba, a Superintendent of Police, said the driver would soon be charged to court for manslaughter.


Garba also confirmed that the driver was being detained at the station, while his vehicle had been taken to the premises of the Onitsha Unit Command of the FRSC.

Posted by mediacop
Email ThisBlogThis!Share to TwitterShare to Facebook
at 03:37