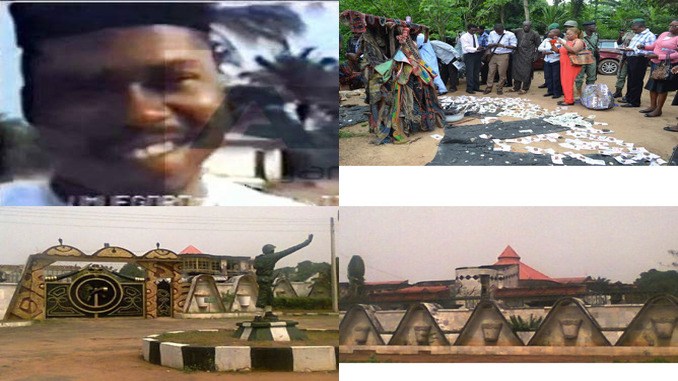 There is apprehension in Ihiala town, Anambra as a N500million mansion belonging to a late billionaire is abandoned over his connection with the dreaded Okija shrine.
A visit to the village called Uzoakwa in Ihiala town, the home of the late billionaire business mogul, who was known as Chief Victor Okafor aka ‘King of Money’ (EZEGO), showed how his N500m mansion had been deserted after his demise.
What is it with “mystery” money?
It was still a surprise to many in the community that despite the expensive properties and valuables inside the abandoned mansion, robbers have not burgled the place to steal any of them because of the late Okafor’s rumoured issue with the dreaded Okija Shrine which they claimed caused his death.
According to some of the indigenes, there was a mystery behind the abandoned mansion comprising many houses with expensive valuables kept inside which made robbers not to vandalise or tamper with those items.
There were even no security in place as the members of the immediate family including his wife and children have not returned to the mansion since he died some years ago.
Exotic properties inside the mansion such as golden chairs and tables, expensive fabrics, rugs, electronics, electrical appliances, abandoned vehicles and others worth millions of naira were said to have remained intact because robbers were avoiding the place.
Checks on why robbers have refuse to invade the place despite the fact that they would have made a fortune there going by the reported high rate of crime in the area especially in the immediate community.
Some of the residents explained that any robber who broke into the mansion may be in serious danger over the story that the Late Okafor had issue with the dreaded Okija shrine.
It was gathered then that Okafor might have attracted the anger of the deity and died due to his failure to come to the shrine to defend himself over a report by one of his kinsmen who reportedly dragged him to the shrine over business transaction which he alleged that Okafor had cheated him.
It could not be verified whether the shrine killed Okafor or not, despite the fact that some believed it happened.


However, it was gathered that if any person died as a result of any issue or altercation with the deity in Igbo land such like the Okija shrine, automatically all the properties belonged to that shrine unless certain rituals were performed.


The late Okafor also known as ‘Udu Bunch’ died in December 1999 after he had an accident around Okija town, few kilometers to his village when he was returning for Christmas and to celebrate his birthday.
His death came with controversies which led to the collapse of his immediate family and business empire. His wife, Nkechi reportedly abandoned the family and remarried.


The will ‘Ezego’ had prepared was not read because the lawyer who prepared the will one Barrister Barnabas Igwe was brutally murdered with his wife.

Posted by mediacop
Email ThisBlogThis!Share to TwitterShare to Facebook
at 01:05