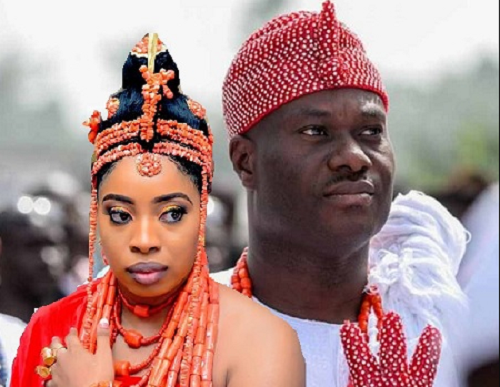 The recent royal rumble has left many speechless and confused. The ooni and his wife, two love birds that were once celebrated are now in a messy media entanglement that has left everyone speculating what could and might have caused the royal rift. To shed more light on the royal debacle Society Reporters NG gathered that Olori Wuraola has been sighted in Lagos and not in Abuja as widely reported.
Society Reporter NG stands by its previous story that headlined Ooni’s father the Baba Oba Aderopo Ogunwusi as the cause of the alleged failed marriage. According to palaces sources the plan to chase olori wuraola was hatched by  Aderopo Ogunwusi and carried out by the Ooni. How did this rumor spread and get into the media?
Fresh facts indicated that the ooni leaked the story that has since gone viral. The young monarch is responsible for the story of olori wuraola’s alleged infidelity seeing the light of day in the first instance. Ooni  wanted olori wuraola gone from the palace at all cost. He cannot chase away an olori due to her inability to conceive but the only way he can get rid of his once beloved queen is to accuse her of infidelity so he, Ooni, cleverly fueled the media with stories of her infidelity and few days later hinted the media with the names of two prominent businessmen who had philanthropic connections to the throne.
The Ooni had series of meetings with the king makers where he was advised to to fix the problem that never in the history of the stool has there been such distasteful scandal involving an Ooni and his olori. The Ooni  agreed to debunk the stories that his marriage had collapsed.
Cleverly, the Ooni’s media team took to social media to do as instructed by the oonirisa to tell the world “THE ROYAL MARRIAGE BREAK UP STORIES WERE MERE DISTRACTIONS AND THAT HIS MAIN CONCERN NOW AS OONI WAS PROMOTING YORUBA CULTURE AND TRADITION GLOBALLY” as a strategy for damage control.
Since ooni failed to achieve olori Wuraola’s quick departure from the palace, he that started the fire had to quickly put out the fire. According to palace sources the day to day  happenings at the Royal Palace is nothing short of the popular TV series called GAME Of THRONES”.


n this particular episode of Ooni’s game of thrones he made two innocent men collateral damages. In the defense of these two innocent men, it must be categorically emphasized that no man in their right senses would dare the gods to have an affair with the wife of the supreme head of the Yoruba race.
Ooni can debunk all these stories from now back to the days of oduduwa, but the fact remains he is not a credible eccentric. Few months ago olori wuraola orchestrated an anti domestic violence awareness walk  in Lagos alongside other prominent women that were  against domestic violence.
Palace sources verified that the olori’s walk was a pointer to this crisis and that was when the world should have realized her desperate cry for help. Sources close to the Ooni’s first wife; Bukola, said the marriage to ooni was plagued by the Ooni’s father and sisters constant meddling in their marriage and now history is about repeating itself with olori wuraola.
Ooni ‘s father and the sisters directed the affairs of his marriage and one would wonder why this is so? This is simply because the Ooni is their only source of income. Their constant financial pressure on the young monarch caused a serious fight between them and olori wuraola. The unemployed family accused olori wuraola of spending ooni’s wealth in beautifying herself whereas the olori who was self made before she got to the throne had more money in her bank account than the entire Ogunwusi family put together. Palaces sources were so infuriated by the way the sisters lord over them.
A particular insider said the three sisters are very uncouth in parading themselves about Ife and Lagos as yeye Obas in all forms of indecent behaviours (this is another story for another day) However, his first wife Bukola has since moved on with her life, keeping a low profile and steering clear from the royals.
Palace sources said the Ooni’s character has made it difficult for any woman to live with him because it is very difficult to keep up with his constant manipulations and mind games. According to a friend the monarch confided in, the Ooni is experiencing problems in impregnating his olori.
Ooni ogunwusi and olori wuraola have tried IVF ‘s and still no luck. There have been several stories planted in the media by the monarch that the royal couple were expectant which was all a farce. Ooni Ogunwusi is facing constant pressure to bear a child and since he knows he is shooting blanks like the Americans would say and he cannot father any more children his father Aderopo Ogunwusi hatched the plan to throw dirt on olori wuraola as an excellent exit strategy for the olori and to conceal the well kept royal secret that Ooni ogunwusi is lacking in the men’s department.
What is the fate of the royal marriage? In my opinion no man should ever sin this much against his wife. Will olori wuraola stay with her beloved and continue to be the weakest link in the marriage, even after packing her loads from the palace? Or will olori wuraola endure this game of thrones through thick and thin till another olori comes knocking?

Posted by mediacop
Email ThisBlogThis!Share to TwitterShare to Facebook
at 03:34