Menu
Home » »Unlabelled » Police Inspector With N1.4m Raw cash Arrested With Others In Hotel Where NNPC Fuel Is Siphoned

Police Inspector With N1.4m Raw cash Arrested With Others In Hotel Where NNPC Fuel Is Siphoned 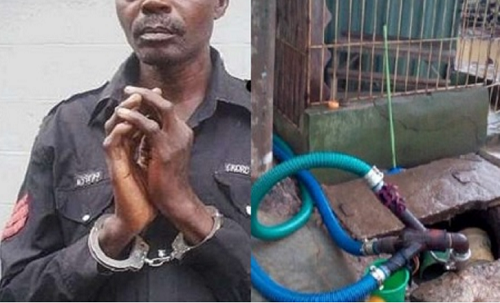 One Inspector of the Nigerian Police, Lukeman Rabiu is among some staff of a Lagos hotel where Premium Motor Spirit (PMS) is siphoned from the pipeline of Nigerian National Petroleum Corporation (NNPC) arrested by the operatives of the Nigerian Navy (NN) attached to the Operation Awatse yesterday.
Those arrested apart from Inspector Lukeman Rabiu of the Lagos Police Command X-Squad Unit are; receptionist Gladys Daniel, waitress Rachael Oludara, housekeeper, Adegoke Adetunji, tanker driver, Waliu Teller, Oluwaseun Oguntoyin, Victor Vincent, 19 and Bobola Kuti, 28.

Inspector Rabiu allegedly had N1.4 million, a laptop and other valuables in his car.  Sources said some police officers were already lobbying for Inspector Rabiu’s release.
It was gathered that three 33,000-litre tankers were loaded overnight with two left. The third one, with registeration number EPE367XE was said to have  developed technical problems and was abandoned at an improvised loading bay beside the hotel.
When our Correspondent visited the area with some naval officers, two other empty tankers were seen on the street.
There were broken bottles, chattered windscreens, hoses and fuel-laden jerry cans inside the hotel. Also clips used to hold hoses on pumping machines were seen in Room 209, said to have been occupied by another fleeing policeman.
It was gathered that the hotel belonged to one Bashorun, who comes to meet with the manager, Osipo Chris and some of the vandals.


According to AWATSE’s Maritime Component Commanding Officer, Commander Chris Akokota, the place was uncovered about 8am.


He said: “At 8am this morning (Wednesday), we got some information from Toplink Security personnel that some criminals perpetrating illegal acts of siphoning PMS products through an NNPC pipeline outside the hotel.
“Upon the information, we quickly deployed our men  and when we got here, we realised that most of the top management staff had escaped through the back gate.
“The junior staff and a policeman, who had stayed here in the past six months, were arrested. We tried to investigate the situation and observed all. When we got here, we noticed the smashed screens and broken bottles. Apparently, there might have been a fight before our arrival.
“We discovered that a fully loaded tanker, which still had the hose on it was parked beside the hotel. It seems the tanker developed fault. We learnt that two others had left and they were waiting for the third one to go so that others can be loaded.
“We also saw about 16 jerry cans filled with PMS with six empty ones and they were all embedded in the vehicles parked in the hotel.”
However, Inspector Rabiu denied being a member of the gang, insisting that he only lodged at the hotel to meet up with his bi-weekly unit meetings.
He could however not explain why he chose that hotel, which was obviously off his route and several kilometres away from his office.
Inspector Rabiu also said he never noticed anything strange in the hotel and was not aware fuel theft was going on there.


He said: “I do not know anything about it. It is not like I stay here permanently. I stay in Ogun State but in order to meet up with our meetings, I lodge here on the days we have meeting and I pay directly to the manager. I never noticed anything strange. I did not survey the environment. I have known this place for about five years and I just come here.”

Posted by mediacop
Email ThisBlogThis!Share to TwitterShare to Facebook
at 09:22