Photos: Nigerian Slay Queen Caught And Disgraced After She Jumped Into Someone`s Fence To Steal Biscuit In Anambra 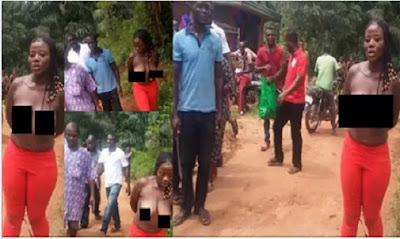 According to a Facebook user Arc Paschal Chike Umeobi this lady was caught by a vigilante in Ezinifite (a town in Anambra State). She allegedly jumped the fence and burgled a building just to steal biscuit but luck ran out of her when one of the vigilantes percieved an unknown intruder and tried to stop her.. to prove she was good at what she does she tried to which prompted the vigilante to shot at her but she dodged the bullate and jumped through other fence and landed in another compound. the owners of the house had to raise an alarm and she was apprehended. When the Lady was interrogated she told the angry mob that she did not steal any money as she could not see where money was kept in the house but she only took biscuit which she has eaten. Could this be hunger?
See What he posted below:

Posted by mediacop
Email ThisBlogThis!Share to TwitterShare to Facebook
at 06:29