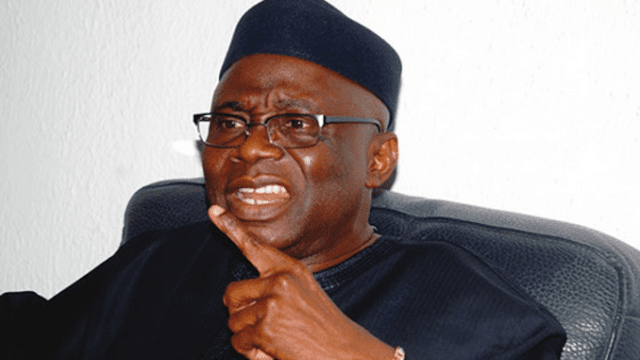 Pastor Tunde Bakare has called on President Buhari to reform Nigeria, He urged the president to salvage the soul of the nation before it’s too late
He added that those agitating in Nigeria have a right to do so
Pastor Tunde Bakare, the serving overseer of The Latter Rain Assembly, has called on President Muhammadu Buhari to restructure the country before it’s too late.


During a church service in honour of Nigeria’s 57th independence anniversary, Bakare, in a sermon titled, “Pragmatic Steps Towards Restructuring Nigeria,” said the buck to reform the country falls on the president, Punch reports


He said: “I must state that, as far as championing the far-reaching structural, institutional and constitutional changes necessary to salvage the soul of our nation is concerned, the words on the desk of the 33rd president of the United States, Harry Truman: “The buck stops here,” are relevant to President Buhari whose legacy is at stake.
Mr. President, the buck stops at your desk and, as always, my earnest prayer is that you find the courage and political will to do what is right at this momentous period in the history of our nation.” Bakare added that those agitating in Nigeria have a right to do so.


He said: “Therefore, those asking for the opportunity to negotiate their existence within the Nigerian state based on their ethnic or cultural identities have a right so to do, as captured in international legal instruments such as the International Covenant on Economic, Social and Cultural Rights, to which Nigeria is a signatory.”

Posted by mediacop
Email ThisBlogThis!Share to TwitterShare to Facebook
at 07:46