Menu
Home » »Unlabelled » Nigerians voted for me rejected you overwhelmingly for incompetence, corruption, running a gov't with no focus or direction - Buhari replies Jonathan

Nigerians voted for me rejected you overwhelmingly for incompetence, corruption, running a gov't with no focus or direction - Buhari replies Jonathan 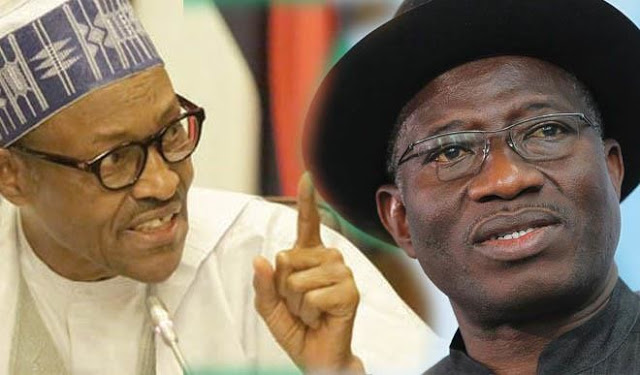 President Muhammadu Buhari has descended on his predecessor, Dr. Goodluck Jonathan for taking a swipe at his administration for what the former president described as running a government of lies and propaganda.
Speaking through his support group under the chairmanship of Hon. Austin Braimoh and Secretary Chief Cassidy Madueke lambasted former President Goodluck Jonathan for his attack on President Muhammadu Buhari for running a government of lies and propaganda.
The group under the auspices of  Buhari Media Support Group (BMSG) said the immediate past president ran the most corrupt government in Nigeria's history with trillions of naira that disappeared without any trace in the hands of those that served in his government during his six-year rule.
Attacking Jonathan further they said  Nigerians overwhelmingly rejected his government during the 2015 elections for alleged incompetence and running a government without a clear cut direction.
The statement reads in part: “to us, it was uncharitable for the former President to refer to APC as running a government of “lies and propaganda”, while at the same time attempting to impress Nigerians that he ran a faultless government with time tested achievements.
“It is unbecoming of former President Jonathan to speak of President Buhari’s government in bad light, even when majority of Nigerians home and abroad believed he ran the worst and most corrupt government ever.


“We submit that the former President should always remember that Nigerians rejected him overwhelmingly during the 2015 Presidential election on the alleged incompetent and directionless government he ran, all through, a reason he should avoid being brazenly judgemental.


“Indeed, the former President ought to be in the dock by now, answering charges on a welter of proven allegations bothering on phenomenal corruption, ineptitude, utter lack of focus and vision, all which combined to make Nigeria a pariah state under him.
“Former President Jonathan cannot claim to be a saint at this point in time when indeed, huge amounts of stolen funds running into trillions of Naira were recovered from men and women, who served in his government, including the former First Lady.
“Nigerians still remember vividly that looting of treasury was an art under the past government of Jonathan, while terrorism gained momentum uncontrollably as government officials under his watch pilfered from monies earmarked to fight terrorism without remorse
“No one is in doubt that Nigeria fell into the abyss under the Jonathan administration with a completely wreaked economy, which eventually gave way to a gripping recession that took ingenuity and wisdom from Present Buhari’s government to resolve.
“The Jonathan’s administration almost nailed the future of Nigeria, dealing a fatal blow on the system with  a fraudulently contrived privatization agenda,  in which only his cronies and henchmen were, mostly beneficiaries.
“In clearing the rot in the power sector, President Buhari did a rescue operation, which lifted power generation from an all time low of 2, 633MW by 2015 to 7,001MW now.
“To us, Nigerians are grateful that the achievements of the President Buhari administration, in a period of just two years, has surpassed those of the entire 6 years of the Goodluck Jonathan era.”
“We, therefore, allude to  the ability of President Buhari to infuse a sense of transparency probity and accountability in the management of the national economy which has helped to curb looting, return stability to the Foreign Exchange Market while external reserve has continue to be on the sharp rise.
“It is also gratifying for Nigerians that the policy of diversification of economy has revived the agricultural sector, leaving farmers to smile to the banks amid the prospects of growth of agro-allied industries in Nigeria


“In all, we, as a group, give kudos to the Economic and Financial Crimes Commission (EFCC) on the recoveries of monies and properties from Jonathan’s alleged group of mother looters, appealing to the anti-graft agency not to relent efforts in ensuring the prosecution of those found culpable”.

Posted by mediacop
Email ThisBlogThis!Share to TwitterShare to Facebook
at 10:15