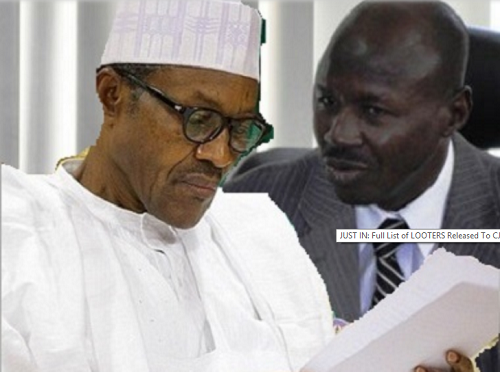 The Chief Justice of Nigeria (CJN), Justice Walter Onnoghen, has received the full list of all the alleged looters being prosecuted across the country, Saturday Tribune has learnt.
The 36 Chief Judges of state judiciaries and the Chief Judge of the Federal Capital Territory (FCT) Judiciary have reportedly complied with the directive from the CJN during his 2017 New Legal Year speech in September.
A top judiciary source revealed that all the Chief Judges and their FCT counterpart filed in all the corruption cases being handled by judges in their various jurisdictions.

The list reportedly contained the names of those on trial, the trial judges and the status of the cases.
It was learnt that the names of former governors, former ministers and former top military brass dominated the list.
Stalled cases like that of a former governor who allegedly got a perpetual injunction against his trial by the Economic and Financial Crimes Commission (EFCC) are reportedly set for reconsideration by the newly-formed monitoring committee.
A former President of the Court of Appeal, Justice Ayo Salami (retd), initially pencilled in to head the committee set up by the CJN to monitor corruption trials nationwide, declined the nomination about two weeks after his name was announced alongside 15 other members.
Plans are reportedly underway to replace him.
Saturday Tribune can reveal that a new chairman will be unveiled by the National Judicial Council (NJC) next week.


The alleged looters’ list, according to findings, will be handed over to the monitoring committee immediately after inauguration.


It was learnt that Salami’s decision to want out of the committee known as the Corruption and Financial Crimes Cases Trial Monitoring Committee (COTRIMCO) won’t force a shift in the inauguration plans for the take-off of the body.
Fresh facts have also emerged on what transpired before and after Justice Salami was nominated as the chairman of CONTRIMCO.
Sources in the know told Saturday Tribune that the retired justice was well informed of the plan to draft him into the project and he was said to have accepted to serve as the chairman of the committee.
It was further learnt that immediately he returned from his trip abroad, Salami met with the CJN and both had a fruitful discussion on how to get the committee started and ensure a smooth running of its operations.
It was reportedly a shocked judiciary leadership that woke up to the news report that Salami was turning down an offer he had earlier enthusiastically accepted.
He was said to have verbally communicated his rejection to the leadership.
Saturday Tribune gathered that the nomination of Salami by the CJN was not without its controversies as many powerful interests in the system reportedly kicked against his involvement due to the issues surrounding his final moments in service and how he eventually left.
Onnoghen was, however, said to have kept faith with his choice, defending him on all the issues raised concerning the propriety or otherwise of having him as the head of an anti-corruption team.
The CJN reportedly argued that Salami would be more of an asset than a liability to the reform agenda.
Saturday Tribune gathered that there was a consensus in the system not to join issues with the claims made by Salami in certain media reports.
When contacted, NJC’s Director of Information, Soji Oye, said he had no comment on the Salami issue.


He, however, said he would have to check with the CJN to confirm the level of compliance by the CJs on the looters list.

Posted by mediacop
Email ThisBlogThis!Share to TwitterShare to Facebook
at 08:29