Menu
Home » »Unlabelled » Governor Fayose Speaks: They Wanted To Killed Me – Reveals Those Behind The Strange Fire That Engulf His G-Wagon In Oshodi {Photos}

Governor Fayose Speaks: They Wanted To Killed Me – Reveals Those Behind The Strange Fire That Engulf His G-Wagon In Oshodi {Photos} 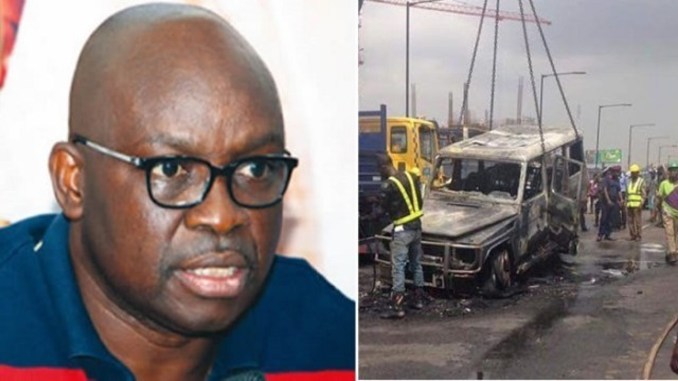 Ekiti state Governor, Ayo Fayose miraculously escaped death in Lagos when a white Mercedes Benz G-Wagon belonging to him was engulfed in a strange and inexplicable fire and completely burnt down along Oshodi-Oworonshoki Expressway on Tuesday.
The cause of the car fire accident still remained a mystery on Wednesday.
According to a statement by his Spokesman, Lere Olayinka on Wednesday, the governor was on his way to Lagos Airport when the accident occurred.
He said:
“There was an accident involving the governor’s vehicle on his way to the airport yesterday (Tuesday).
“Though he was meant to be in the vehicle, by providence, he was not there.
“What caused the sudden fire under the vehicle is yet to be ascertained.
“The governor is grateful to God that no casualty was recorded. He also thanked the people who made spirited efforts to put out the fire.”
Recall, Fayose had during the weekend, joined other governors from the 17 Southern States as they converged in Lagos for the first time in 12 years to discuss national issues.
Others governors included the Lagos State Governor, Akinwunmi Ambode; Ogun State Governor, Ibikunle Amosun; Ondo State Governor, Rotimi Akeredolu; Osun State Governor, Rauf Aregbesola and Oyo State Governor, Abiola Ajimobi.

Posted by mediacop
Email ThisBlogThis!Share to TwitterShare to Facebook
at 03:02