BREAKING! Should Catalonia Declare Independence In Just Few Hours, See How That Could Help IPOB Achieve Biafra {UN Is Aware} 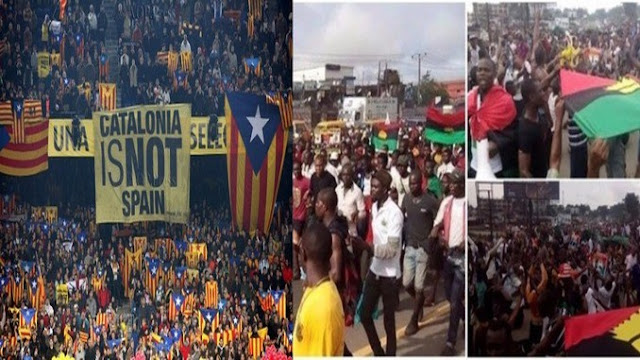 Pro-independence Catalans began to gather on the streets of Barcelona Tuesday ahead of a hotly anticipated speech by the region’s leader on the status of the restive province.
Carles Puigdemont, the President of Catalonia, is under intense pressure to back down from plans to declare independence from Spain following a disputed referendum.
Puigdemont is due to address a specially convened session of the region’s parliament that begins at t 12pm ET.
The Parc de la Ciutadella, which houses the Catalan parliament building, was sealed off to the public for safety reasons, with the Catalan police Mossos guarding the entrances and exits.
National police and the Guardia Civil kept a low profile, according to CNN reporters.
Officers of Catalonia’s regional police force stand guard outside the Parliament of Catalonia.
European Council President Donald Tusk urged Puigdemont to back down. “The force of arguments is always better than the argument of force,” he said in Brussels.
“Today I ask you to respect in your attentions the constitutional order and not announce a decision that would make such a conversation impossible,” he said. “Diversity should not lead to conflict whose consequences would be bad for Catalonia, Spain and the whole of Europe.”
Mayor of Barcelona Ada Colau, an influential figure who has been critical of both sides, called for de-escalation. She urged Puigdemont not to make a unilateral declaration of independence, and also called on the government of Prime Minister Mariano Rajoy not to impose direct rule from Madrid. “Now is the time for dialogue,” she said in address from in Barcelona.
Barcelona mayor Ada Colau delivers a speech at the City Council in Barcelona.
Colau said Spain was experiencing its “worst institutional crisis since democracy began” and said Spain’s political elected representatives should “find a solution that is inclusive and up to standards we have been living.”
Neighboring France said Monday it would not recognize an independent Catalonia — and independence would result in automatic expulsion from the European Union.
Political uncertainty
However thousands of supporters of independence are expected to show up at the parliament in Barcelona to show support for the plan, and to call on Puigdemont to honor his commitments to the separatist movement.
The political uncertainty began with a divisive and controversial referendum on October 1 that found a majority of Catalan voters in favor of independence for the wealthy, northeastern region of Spain.
Madrid declared the referendum illegal and Spanish police tried to shut the vote down by firing rubber bullets and pulling voters from polling booths in scenes that shocked many across Europe.


Catalonia’s Minister of Foreign Affairs, Raul Romeva Rueda, told CNN’s Nima Elbagir that the Catalan side has long wanted to negotiate a fair bargain with the Spanish state.
“What we have always demanded is a political dialogue. The opportunity to (practice) democracy, to allow everybody to express themselves … We want to talk, we need to negotiate. The problem is nobody’s listening from the Spanish state side.”
He said that the Catalan government has invited international mediation and called for dialogue.
“We say, ‘we are ready, we want to go to the negotiating table. We are ready to start talks’ … If (the central government has) an offer to make we are very much keen to listen to them.”
PM: ‘Spain will not be divided’
Prime Minister Rajoy is determined to prevent a breakaway by the northeastern province in the wake of the October 1 vote.
“Spain will not be divided, and the national unity will be preserved. To this end we will employ all the means we have within the law. It is up to the government to make decisions, and to do so at the right moment,” Rajoy said in an interview with German newspaper Die Welt on Monday.
Catalan authorities said 90% of voters chose independence from Madrid, but the result was not as decisive as it appeared — turnout was only 43%.What’s at stake?
The stakes are high for both Spain and Europe if Catalonia chooses to break away.
Catalonia accounts for nearly a fifth of Spain’s economy, and leads all regions in producing 25% of the country’s exports, CNNMoney reports. It contributes much more in taxes (21% of the country’s total) than it gets back from the central government.
The prospect of an independent Catalonia has already prompted two major banks and some other businesses to move their registered headquarters to other parts of Spain.
There is more at stake for Madrid than losing wealth. The country has 17 regions with varying degrees of autonomy, and losing one may inspire others to begin, or revive, separatist movements.
But there are many other unanswered questions, including continued membership in the European Union.
If forced to apply independently for EU membership, Catalonia would have to convince all of the bloc’s current members, including Spain, to agree.


And if Catalonia became an independent state, it would not automatically be a World Trade Organization member, so would likely face stiff trade barriers that would hurt its economy.

Posted by mediacop
Email ThisBlogThis!Share to TwitterShare to Facebook
at 02:43