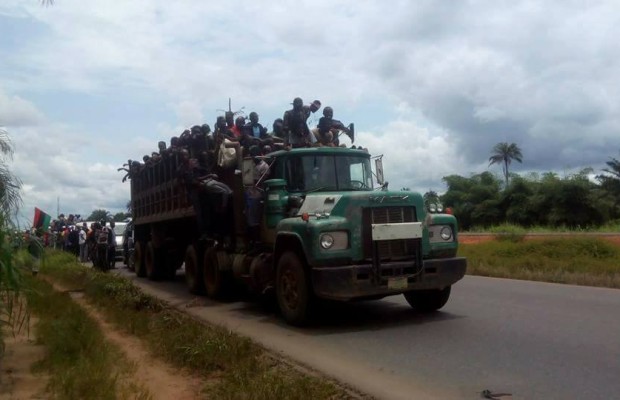 Biafra National Guard (BNG) says the Operation Python Dance II, to be carried out by the Nigerian Army in the South-east was targeted at Nnamdi Kanu and other agitators.
A statement Wednesday morning by self-styled ‘Major Nkuma’, said BNG knew that the operation “is a show of force and genocide intention which has already started”.
It, however, said the Army should be prepared for BNG warning that its the leadership of General Innocent Orji was ready for war.
The statement reads “We fear not; we dine, sleep and live hostility and will defend our lives. BNG continues to make it loud and clear that Biafra needs activation of self defense as enshrined in UN 2007 charter to restore Biafra and that is what BNG represents.
“Our commander; General Innocent Orji does not subscribe to defenseless agitation which is suicidal in Nigeria, but to continue on the path of non-violence, Nigeria must withdraw lethal force which might be impossible because we are considered slaves that deserve death. Our commander knows the terrain of self defense as enshrined in 2007 UN Charter on the rights of indigenous people.
“As we continue to make it clear; self defense is due because our people have continued to face death, threatened with suicide, promised to be crushed by Buhari and the leader of Indigenous People of Biafra whom BNG is saddled with responsibility of defending has come under severe threat as well.
“The people of Biafra and her leadership fully support the decision of Biafra National Guard because we are not violent agitators but out to stop the unlawful killing of our people. Biafra National Guard is not a violent group rather Nigerian military is violent to our people; killing and maiming us and BNG is an outfit designed to curb the wanton killing of Biafrans. We have never been violent in any shape or form; but would resist unlawful killing of our people.
“Operation Python Dance I- was formerly launched in Oct 27 through Nov 27 2017 which purportedly targeted kidnappers but the recent launch according to Major General David Ahmadu targets violent agitators and the question is, what violence is there in Southeast? The Nigerian military must understand that Biafra National Guard values life and respect human rights.
“Unlike Nigerian military that find strength against unarmed and peaceful civilians; we the Biafra National Guard find strength against unlawful hostile, undisciplined, happy-trigger soldiers that violate human rights, crush peaceful and law-abiding citizens. Operation Python Dance II in Southeast is a show of cowardice; BNG is not Southeast movement but Biafra military wing.
“The blood of the people of Biafra makes the python dance and merry; our molestation makes the python happy and laugh. Road blocks in Biafra make the python dance and party round, throw money like politicians. Raping our women makes the python dance but very soon Biafra National Guard shall make the python shade tears by denying the python the evil deeds that makes it dance.
“Northern Nigeria under the leadership of Arewa consultative forum obviously declared genocide against us; made genocide song, threatened us with quit notice and no single operation was launched in Northern Nigeria to defend our people. Nobody demanded account or investigated the act; nobody launched road blocks, nobody raided and not a single army was seen loitering in the North.
“Everything was okay because people that deserved death were to get it; even if Python Dance X (10) will be declared because Biafra National Guard vowed self defense, let them go on. If Nigerian military is fit; they should crush Boko Haram and not civilian populace. This python dance should be well informed that the days BNG was away are over.


“Fulani herdsmen have been killing our people and raping our women; attacking us in our worship centers and destroying our farms and nobody including the Nigerian military launched any operation to checkmate this terrorist organization sponsored by Buhari and Britain but just the moment Biafra National Guard declared that they won’t fold arms while their people are murdered on daily basis, Buhari and Britain launched operation Python Dance II. We refuse to continue to be species of terror; we shall defend ourselves, our women, our farm and our worship places against unconstitutional acts.
“Britain is responsible for the launching of Operation Python Dance II; they want to keep depopulating us and keep us under slavery to have unlimited access to our natural resources. Britain must be held responsible in advent of full blown war because we shall defend ourselves.
“The genocide being orchestrated by Britain in Biafra land; there is the need for other world leaders to beam their searchlight in Biafra as to bring Britain to justice. Since 1967; it has been this way but the end of the road is today.
“The Russian federation, USA under the leadership of just-Trump and Israel must make up for their silence between 1967 and 1970 genocide against the peaceful people of Biafra, they looked on while their precious and natural allies perished in the cold hands of Britain.
“We have moved on and mankind has moved on but never again shall we go back to 1967 monumental sheer wickedness against humanity. Biafra National Guard is ready to restore and defend the sovereign state of Biafra.

Posted by mediacop
Email ThisBlogThis!Share to TwitterShare to Facebook
at 10:28