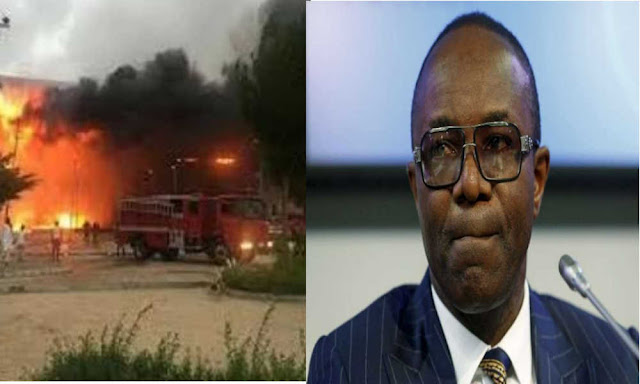 The Nigeria Minister of State Petroleum, Dr. Emmanuel Ibe Kachikwu’s House in Asokoro, a highbrow area of the Nigerian federal capital territory Abuja, just beside the Aso rock presidential villa was set ablaze by alleged Hausa Fulani thugs. However, many believe that this was NOT unconnected with the $25 billion dollar corruption issue between Kachikwu and Maikanti Baru, Group Managing Director of the Nigerian National Petroleum Corporation.
Recently, Kachikwu accused Baru of handing out contracts amounting to the tune of $25 billion, without recourse to the NNPC board which he (Kachikwu) chairs.


Kachikwu also accused the Group Managing Director of the Nigerian National Petroleum Corporation (GMD) of gross insubordination in the discharge of his duties; and of basically humiliating him, in his capacity as minister


A report by The Cable indicates that the private residence of Ibe Kachikwu, caught fire on Sunday, October 15. According to the report, the fire started in the bedroom of the minister of state for petroleum in the evening. The house is located in Asokoro, a highbrow area of the Federal Capital Territory, Abuja.
Although the report has it that the fire started in Kachikwu’s bedroom, an insider close to the embattled minister disclosed to Afroinsider that the fire is suspected to have been the handwork of those who felt that Kachikwu has over stepped his bounds by speaking up on the massive corruption going on in Buhari’s government.
Recall the Mazi Nnamdi Kanu, the leader of Indigenous People of Biafra had prophesied that any Biafran who serve Nigeria will surely come back in shame. This Kanu’s prophesy has become self fulfilling in the chain of events happening to Ibe Kachikwu at the moment.
Kachikwu is believed to have been punished for having the effrontery to speak up against alleged bullying and looting of public fund by the Nigerian National Petroleum Corporation, NNPC GMD, Maikanti Baru.


Baru believes that Kachikwu being a slave, who should be content with the crumbs falling down the master’s table and should not have had the audacity to blow open what is going on in the NNPC.

Posted by mediacop
Email ThisBlogThis!Share to TwitterShare to Facebook
at 07:38