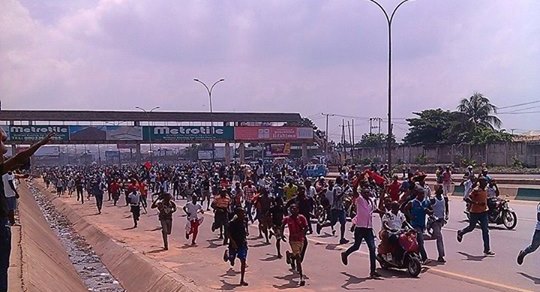 Two persons were feared dead and scores wounded, yesterday, when supporters of the Indigenous People of Biafra (IPOB) and soldiers clashed in Oyigbo, capital of Oyigbo Local Government Area of Rivers State.
Daily Sun gathered that the clash started at the popular Oyigbo Express Junction, when IPOB members received information that some of members had been ambushed by soldiers and eight allegedly killed at 44 Battalion Asa, in Abia State.
A source said the travelling IPOB members were said to have allegedly responded to a call from their second-in-command, Uche Mefor, who they claimed, called in from London. He reportedly ordered IPOB members to move down to Nnamdi Kanu’s residence in Umuahia, Abia state.
According to the source, in reaction to Mefor’s call, IPOB members mobilised and started protesting, with some of them attacking people they suspected were opposed to the Biafra struggle.
It was alleged that some IPOB members seized three rifles from policemen and burnt a police van at Oyigbo junction, and forced business and shop owners to lock up, as motorists and commuters scampered for safety.
A witness, who declined to be named for security reasons, recounted how “northern traders hurriedly closed their shops and ran for safety, with some of them running to Oyigbo Police Station. At the popular Nkwo Oyigbo Market, at Afam Road, people ran helter skelter, as guns boomed from Oyigbo Express junction, while soldiers mounted sentry at the railway and near Abriba Quarters, to provide safety for the northern traders.”
But, spokesman of 6 Division, Nigerian Army, Port Harcourt, Colonel Aminu Iliyasu, told newsmen that no soldier was deployed to Oyigbo to stop IPOB members from travelling to Umuahia.
“I am in Bayelsa now, but people have been calling, telling me that there is a situation in the Oyigbo area. But, I don’t know exactly where this is happening. But one thing is certain, no soldier was deployed to Oyigbo and asked to stop IPOB members from travelling to Umuahia,” said Iliyasu.
The violent clash caused serious gridlock along Aba-Port Harcourt, particularly the Toll Gate axis of Port Harcourt.
Another witness, Chuks Madu, a trader, who was travelling to Aba, said the bus he was in, was trapped at Toll Gate for several hours, following blockade by security agents, to forestall the protest escalating to Port Harcourt. Madu said he had to return to Port Harcourt, after trekking to Eleme Junction, before getting a vehicle to his destination.
Meanwhile, different parts of Aba was tense, yesterday afternoon, after soldiers, under the Operation Python Dance 2 clashed with IPOB members.
Unconfirmed reports indicated that some people died after the clash.


Trouble started when some IPOB members left Aba, in the morning, for Umuahia, to stand in solidarity with Kanu, over alleged invasion of his home town, Afara Ukwu, in Umuahia.
The IPOB members were stopped by soldiers at Isiala Ngwa Junction, along the Enugu/Port Harcourt Expressway and were allegedly manhandled, with some of them forced to roll inside muddy water.
Those who escaped the soldiers’ wrath at Isiala Ngwa junction, were said to have met another set of soldiers at Osisioma junction, on the outskirts of the city, which eventually led to a face-off. The soldiers were said to have shot sporadically as IPOB members moved towards Ariaria International Market, which caused pandemonium as people scampered for safety.
The chaotic state which enveloped the Osisioma axis stretched beyond Ariaria market, to the Flyover junction, a distance of over eight kilometres, allegedly led to the destruction of some vehicles and deaths of unconfirmed number of people.
There was pandemonium also within the city centre when soldiers cordoned off all roads leading to the Central Mosque, on Mosque Street, to prevent hoodlums from taking advantage of the situation to vandalise the Mosque.
As soldiers condoned off the area, they shot sporadically to ward off intruders and people ran for dear lives, which forced traders to close business for the day and rushed home.


The situation was still tense as at the time this report was filed. To ease tension, Abia State Governor, Dr. Okezie Ikpeazu, declared dusk to down curfew in the city.

Posted by mediacop
Email ThisBlogThis!Share to TwitterShare to Facebook
at 10:29