Victory for Nigerians as President BUHARI humiliates OSHIOMHONLE, others, joins debate on RESTRUCTURING of Nigeria 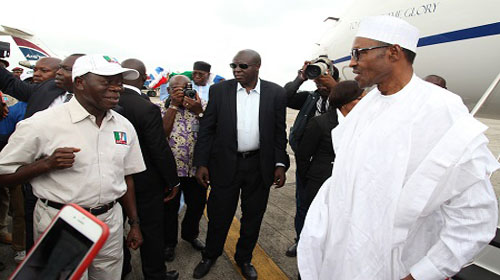 PRESIDENT Muhammadu Buhari has reportedly yielded to voices of reason against dissenting voices like that of the former Edo State governor to see the reasons with the barrage of voices clamouring for a restructuring of  Nigeria amid the raging crisis threatening to tear the country apart.
Recall the former Edo Governor, a strong opponent for the restructuring of Nigeria was recently booed and jeered in the Nigeria's capital city of Abuja while addressing workers at the Nigerian Labour Congress conference.
Oshiomhole was reportedly pelted with missiles until the timely intervention of the NLC president which forced Oshiomhole to eat the humble pie by tendering an unreserved apology to the irate workers.
In a similar vein, former President Olusegun Obasanjo has equally been under fire from Nigerian for opposing the call for a restructuring of Nigeria which may have made the President unyielding at every turn.
But in what appeared like a dramatic turn of events, LEADERSHIP newspapers reports that President Buhari in his first response to the deafening clamour for the restructuring of the country’s federalism, President Muhammadu Buhari, passed the buck on discussions to the National Assembly and the National Council of State.
Leadership reports that 'President Muhammadu Buhari, in a nationwide broadcast following his return from a 103-day medical vacation in the United Kingdom, disclosed that the National Assembly and the National Council of States are the legitimate and appropriate bodies for national discourse on restructuring.
The President, who by his statement, effectively slammed the door against the report of the National Conference, for which he has never hidden his disdain in the past, also restated that Nigeria’s unity was not negotiable.
He also warned that his administration would not allow irresponsible elements to trouble the nation, but at the same time acknowledged that there are legitimate concerns.
Giving credence to the President’s position, Senior Special Assistant on Media and Publicity to the President, Garba Shehu, in a statement explained that Buhari has no power to impose restructuring on the country by military diktat.
Sheu explained that the President is constitutionally bound to work with the National Assembly to deal with such complex issues, reminding critics that the president would not exercise arbitrary powers or bypass the legislature in taking such fundamental decisions.
According to him, calling Buhari an enemy of Nigeria is in extreme bad taste, noting that nothing in the president’s service record would justify such scurrilous language.
The Presidency declared that President Muhammadu Buhari has no powers to restructure the country by military fiat.
The statement noted that restructuring and other constitutional changes are within the purview of the National Assembly members who are the elected representatives of the people.
The statement however advised opinion leaders in the country to exercise restraint in their choice of words to avoid heating up the polity and causing acrimony across the country.


Although, Ikimi agreed nobody should tag the president an enemy of Nigeria as he said such statement was in bad taste, he disagreed with the President’s position which suggested that only National Assembly and the Council of State could discuss the matter.


Despite these promises, only 46 senators voted in support of the bill, which fell short of the needed 73 which is the two-thirds majority it needed to pass. In the House of Representatives, 210 members voted a yes, which also did not meet the 240, two-thirds majority.

Posted by mediacop
Labels: news
Email ThisBlogThis!Share to TwitterShare to Facebook
at 01:41