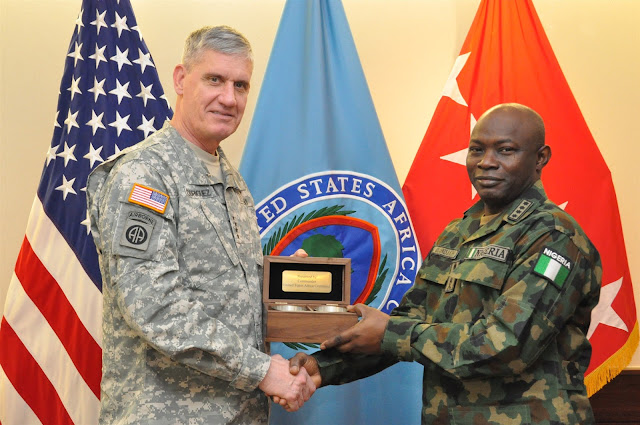 Nigerian military is confronting no fewer than fourteen security threats all over the country, the Chief of Defence Staff, Gen. Abayomi Olonisakin, says in New York
He disclosed this while speaking at a reception organised for him by the Permanent Mission of Nigeria to the UN.
The defence chief spoke on the real threats confronting Nigeria and remained silent on the agitations for a breakaway Biafra republic while  at the UN headquarters for the Second Chiefs of Defence Conference, alongside more than 100 other chiefs of defence staff all over the world.
He said “by my estimation, we have about 14 security threats that we are confronting, ranging from terrorism, insurgency, kidnapping, cultism, to issues linked to armed robbery.
“We are handling operations in all the geo-political zones of the country, but the major one is the one in the Northeast, which is ‘Operation Lafiya Dole’.

“We have, of course operations down South and taking charge of militancy and oil theft; we also have that in Lagos.
“But the major one is Operation Lafiya Dole, which of course since we came on board, we have stepped up the scheme.
“Right now, we have been able to decimate Boko Haram terrorists, but what they are doing right now is hitting soft targets through suicide bombers.


“We realised that to mitigate this particular menace is not only about the military. So we need to carry the whole nation along to be able to address that.”
To mitigate incidences of suicide bombings, Olonisakin said military high command had met with other stakeholders to encourage the populace to provide them with necessary intelligence.
He said the command realised that intelligence was vital to handling the menace of suicide bombings.
The defence chief also said that the military had commenced the process of restoring full civil authority in areas formerly controlled by Boko Haram terrorists.
“We are working alongside the DSS – Department of State Services -, the Police, and the Nigerian Security and Civil Defence Corps.
“We are also ensuring that the civil authority is put in place; places that the military had taken over, we encourage the Police and Civil Defence to come on so they can provide civil authority for displaced people to move in.”
Olonisakin noted that last week, many Boko Haram militants surrendered, adding that “we have what we call Operation Safe Corridor in Gombe that is to handle this kind of surrendered terrorists.
“I believe in the next couple of days, repentant Boko Haram terrorists will be moved to that Operation Safe Corridor where they will conduct de-radicalization and integration procedure for them.
“Down South, of course we have issues too but the military is stepping up its game to make sure we address the security challenges back home.”
On peacekeeping operations, the chief od Defence staff said Nigeria had met and exceeded the gender percentage, having 16.2 per cent female peacekeepers as against the 15 per cent benchmark by the UN.
The Nigeria’s Ambassador/Permanent Representative to the UN, Prof. Tijjani Bande, commended Nigeria’s security forces for decimating the Boko Haram as a fighting force.
Bande said “soft targets are being exploited by desperate group but in truth, even beyond Boko Haram, other challenges are also being addressed.


“What is important is the synergy that has been expressed by Chief of Defence Staff in relation to what all the security agencies are doing together; when we work together, we are secured.”