Menu
Home » »Unlabelled » KANU's sureties, Sen Abaribe, others panic as FG tells them to prepare for long time in prison over sudden disappearance of the IPOB leader (See photo of sureties)

KANU's sureties, Sen Abaribe, others panic as FG tells them to prepare for long time in prison over sudden disappearance of the IPOB leader (See photo of sureties) 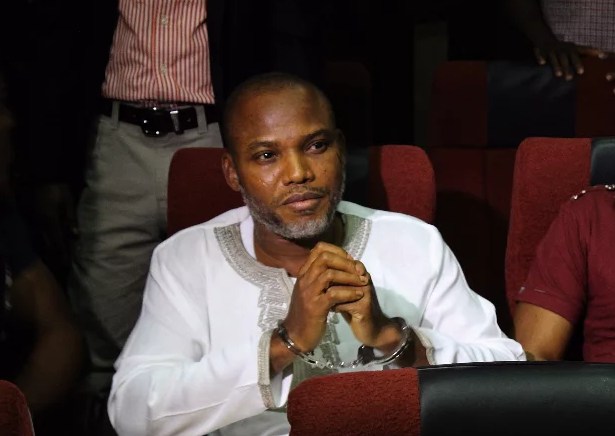 Some well-meaning Nigerians who stood surety for Nnamdi kanu, the embattled leader of the Indigenous People of Biafra (IPOB)risk lengthy custodial sentence over the sudden disappearance of the IPOB leader, Presidency source have revealed.
Kanu, the Federal Government alleged , has violated his bail condition and therefore runs the risk of being be -re-arrested on the next court day.


However, the Federal Government yesterday said there was no going back on holding those who stood sureties Kanu to ransom should he fail to appear in court or should they fail to produce him in court.

As part of the bail condition, Kanu was asked to produce three sureties including a highly respected Jewish leader, a highly placed Igbo person and a respected person who resides and owns property in Abuja .

Each of the surety was asked to sign a bond of N100 million each. Meanwhile, counsel to Kanu, Ifeanyi Ejiofor had last Tuesday raised the alarm that his (Kanu) whereabout is not known since the military invaded his house in Abia State. Ejiofor had alleged that his client might have been killed.

However, speaking on the legal implication of Kanu’s failure to attend court on the next adjourned date, Special Assistant to President Muhammadu Buhari, Chief Okoi Obono-Obla in an exclusive chats with Sunday Telegraph in Abuja noted that it is as clear as crystal that Kanu has violated all the conditions prescribed by the court.


He said: “The Federal Government has already filed a motion to set aside the bail of Kanu. Following the military exercise carried out in Umuahia, Abia State and the subsequent proscription of IPOB, Nnamdi Kanu has not been seen and may have gone underground.
“So it is not likely that he will appear in court on the next adjourned day for fear of being arrested by the police or security agencies. Kanu had sureties that entered into recognizance or signed bail bonds as ordered by the court that led to his release.

“What is a recognizance? In law, recognizance is a security entered into before a court with a condition to perform some act required by law; on failure to perform that act a sum is forfeited.
“The position of the law as provided under Section 173 (1) of the Administration of Criminal Justice Act, 2015, is that a defendant whom recognizance was entered on his behalf and who is subsequently released on bail is bound to appear before the court at every time and place to which during the course of the proceedings, the hearing may from time to time be adjourned.
“The court also may issue a warrant of arrest where a defendant (Kanu) bound by a recognizance or bond fails to appear before a court or police station. It follows that if Kanu fails to appear before the Federal High Court on the next adjourned date, the Judge will likely order a warrant for his arrest.
“The implication of the failure of Kanu to appear in court on the next adjourned date on those who stood sureties for his recognizance is that his recognizance shall be forfeited.
"The court shall order his bond entered by his sureties to pay the penalty or to show sufficient cause why the penalty should not be paid.
“It follows that Kanu’s three sureties will be ordered to pay N100 million each. Where sufficient cause is not shown by the sureties or the persons bound and the penalty is not paid, the court may recover the penalty from the person bound or from his estate if he is dead, in the manner laid down in the Administration of Criminal Justice Act, 2015 for the recovery of fine.

“However, where the penalty is not paid and cannot be recovered in the manner laid down by the law, the person bound shall be liable to imprisonment for a term not exceeding six months,” he said.

Posted by mediacop
Email ThisBlogThis!Share to TwitterShare to Facebook
at 01:38