How Evans Betrayed Me And My Wife - Uche Amadi, Head Of Kidnap Gang Makes Chilling Confession 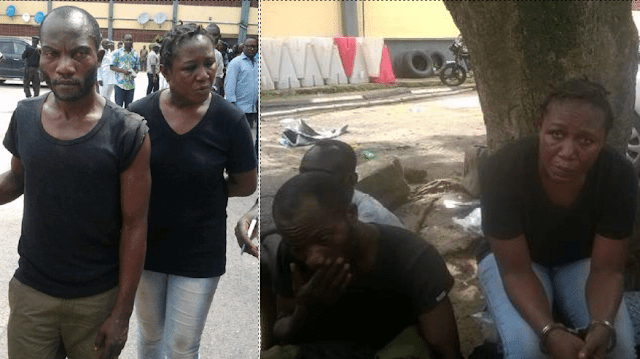 Head of the detention camp of the arrested billionaire kidnapper, Chukwudi Duneme Onuamadike aka Evans, Uchechukwu Amadi has revealed how he was cheated by Evans


Speaking to Pulse.ng, Amadi who is a native of Ngo Okpala, Imo State, said he was not happy that despite the billions of naira and dollars his boss collected as ransom, he and his wife who ran the camp were poorly paid while the boss was busy investing in choice properties and buying big cars.

He was upset that Evans used him and his wife, Ogechi, to run the camp in his house located on 21 Prophet Ashaye Close, New Igando, Lagos State, where he took care of their victims while his wife cooked for them only to be paid pittance.

The couple was among the six gang members of the dreaded kidnapper who were paraded at the State Police Headquarters in Ikeja on Sunday, June 11, 2017.

Amadi explained that his job was to keep the victims and take care of them for many months while Evans negotiated the ransom payment while his wife cooked food for them and made sure they were comfortable for as long as they remained in his care.He added that the house was paid for by Evans and his wife’s name was used to pay using another woman identified as Ngozi, so as not to raise the suspicion of the landlord and others in the neighbourhood before they moved in.

The camp leader further disclosed that he met Evans while he was working at a motor park in Mazamaza, Lagos, before he traveled to Malaysia for greener pastures but had to come back after a year because he had problems with his girlfriend and he was declared wanted.

When he came back, he teamed up with Evans and was made the head of the detention camp

“My role was to keep the victims, take care of them and make sure they were comfortable. At times, I kept them for two to three months while Evans negotiated for the payment after which they would be released.

“My wife’s role was to cook for the victims and made sure they were comfortable. We did not torture any of them because we knew they were the cash cows.

“We kept them as long as Evans wanted and only hand them over to another gang when he gave us the go ahead after the complete ransom must have been paid.

“I did not know that victims were paying millions of dollars as ransom to Evans, neither did we know he was using the money to acquire choice properties.

“Nothing much has been given to me and my wife who was keeping and taking care of the victims,” Amadi lamented.

Mr. Amadi added that he started having problems with Evans when a pharmacist they had kidnapped about three months ago escaped after being in the captivity for two months while negotiations were still going on.

“Till today, he said, “I don’t know how the man managed to escape from the house. It is still a mystery. Before we were arrested, Evans had been calling me to threaten that he was going to kill me and my family and also burn my house.

Uchechukwu Amadi went on to say that it was good that they were all arrested because he and his wife were living in fear knowing fully well that Evans is very vicious and deadly and had marked them for death.

Posted by mediacop
Email ThisBlogThis!Share to TwitterShare to Facebook
at 09:50