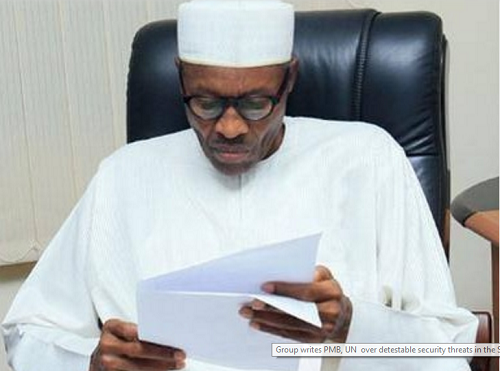 
10.     We are perturbed and indeed, overwhelmed by the persistent violent aggressions and coercive exploits of IPOB, through its arms and militant wing, the BSS. We suspect strongly that since BSS is peopled by outlaws, they are responsible for the spate of assassinations of kinsmen opposed to their fluid and dubious idea of a Biafran state; its members are the masterminds of kidnappings/abductions for ransom; armed robbery; extortion of hapless people at gunpoint and other sundry acts of lawlessness and crimes against the state in Southeastern Nigeria


11.    Your Excellency Sir, we have cause to worry over these developments in our nation. This is  because reliable information at our disposal suggests that the proceeds from the unlawful operations of the BSS in crimes around the Southeast region is one of the   prime sources of the funding of IPOB to execute its foreign-backed agenda of destabilization of Nigeria, manifest in the palpable awesome insecurity, chaos and anarchy in the region.
12.    And in the last few months, it has been observed that IPOB has assumed the monopoly of violence and crimes in the Southeast region. It is also recruiting left-overs of criminal elements in the region into its fold, who are assured about the veiled cover of BSS to hide and audaciously commit heinous crimes against the people, undetected and un-policed, masked with the garments of secessionists struggles in public appeal.
13.     The heightened crimes and insecurity in the Southeast presently is heavily nourished by these antecedents of IPOB, which may not abate soon, unless the Federal Government of Nigeria take decisive actions against IPOB and its criminal affiliates to secure lives and property in the region.
14.     Even now, the Southeast region is under siege by these criminal elements, as everything which gives legitimacy to life and existence or dignity is fast crumbling or has already crumbled because of fear of attacks, resulting in death, largely due to the activities of IPOB. The vibrancy of businesses or economic and civic life in the region is on its historic lull, as evident in the frequent sit-at-home orders issued by IPOB leader, which compliance is enforced by members of BSS through intimidation, coercion and brute force.
15.     And at such instances, resistance by any person most often leads to his untimely death in the hands of IPOB members, much as looting spree goes on unhindered. These have inflicted enough agony and pains on us and it is getting to intolerable limits of endurance.
16.       But before we end our submissions, may we briefly expand on BSS, the militant wing of IPOB. The recruitment of jobless agile Nigerian youths into the so-called Secret Service of the Biafran “security” organization attracts some fee or outright extortion of money from interested persons. It explains the zeal and mindless quest to recoup spent funds through the wild criminality. IPOB leader has already publicized his intention to prevent voters from performing their legitimate civic duty by participating in the forthcoming governorship elections in Anambra state. It plots to draft the ragtag army of the BSS to frustrate and actualize this threat by hook or by crook.
17.      Generally therefore Sir, we perceive these acts and dispositions of IPOB as threats from criminal elements against Nigeria’s democracy and the nation-state. And to further fortify their actions and garner public sympathy, IPOB has set up an elaborate media campaign team to blackmail the Federal Government and its security agencies in discharging its onerous lawful responsibilities to the people of Nigeria by protecting lives and property. We fear that failure to checkmate this illegality, the trend may be replicated in other parts of the country, as the next general elections in 2019 approaches.
18.      We therefore plead with Mr. President never to abandon the Southeast region to these criminal elements who have activated their media infrastructure to blackmail the Nigerian military from carrying out its Constitutionally lawful duties as stipulated by the directives of the Presidency. Although, the cost of security operations of this nature is enormous, but we appeal for the extension of the exercise of “Operation Python Dance II” by a month more, to enable the military embark on thorough cleansing of the land of criminal gangs.
19.      Please accept our appreciation for your listening ears and kind understanding, Sir.
Thank You.
SIGNED:
Comrade Charles Mbani
National-Co-ordinator
Southeast Revival Group (SRG)
CC :
1.     National Security Council
2.     All Heads of Security Agencies in Nigeria.
3.     The Senate President.
4.     Speaker, House of Representatives.
5.     The Chief Justice of Nigeria (CJN).
6.     South East Governors Forum.
7.     All South East State Governors.
8.     National & International Human Rights Organizations.
9.     All Civil Liberties organizations’ (CLOs).
10.    All Civil Societies organizations’ (CSOs).
11.     High Commissions & Foreign Missions in Nigeria.
12.     All First Class Traditional Rulers in Nigeria.

Posted by mediacop
Email ThisBlogThis!Share to TwitterShare to Facebook
at 09:30