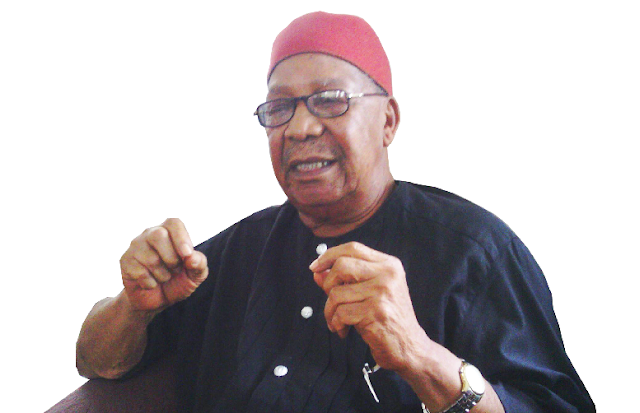 First Republic Aviation Minister and one of Nigeria's foremost nationalist, Chief Mbazulike Amechi,  says Nigeria may explode soon.
Worried by the current agitation ravaging the country, the elder statesman said there is an urgent need to renegotiate the basis for Nigeria's federalism.
He said we was particularly concerned on the current agitation  rocking
the Nigerian boat and would not sit idly and watch things go bad.
This, he said, informed his interest and desire to intervene by offering his fatherly advice drawn from his wealth of experience while describing the present situation in Nigeria as very grave.
He said: ”The very loud and universal demand for restructuring of our federation, the go home order by an amalgamation of Northern youths to the Igbo living in the North, the IPOB demand for referendum and break-away of the people of Biafra, the threat to a free conduct of gubernatorial election in Anambra State, all constitute a grave threat to peace and security in the country. And it is likened to the country sitting on a keg of gunpowder.
He added: “Generally, there is urgent and pressing need for a renegotiation of the basis of this federation called Nigeria.
The long absence of the elected president and the uncertainty of when he can resume his office has not helped matters, for there is a limit to what the acting president will do in the presence of many hawks planted around him. But the country should not be allowed to remain indefinitely in this vacuum.


“All relevant voices in the North and South of Nigeria have called for an urgent coming together to revise the injustices which military rulers of a particular side of the country have imposed on 200 million people. If the hawks in control of power will continue to obstruct an urgent coming together to correct the wrongs and injustices of yesteryears, they may break the egg and the long oppressed and exploited parts of the country will eat the yolk,” the elder statesman said.
He recounted his encounter with Nnamdi Kanu who paid him an unscheduled visit in his country home, Ukpor, Nnewi South Local Government Area of Anambra State, in company of a priest, a deacon and three other people to pay him respects as the oldest nationalist and political father in this part of the country and briefed him on the struggle he (Kanu) is leading for the resurrection of Biafra.
Amechi said during the discussion, he made reference to the demand by IPOB for a referendum on the question of Biafra and the resolution of the group to advise the people of Anambra State to boycott the gubernatorial election scheduled for November 18.
He said he strongly advised Kanu to get IPOB to rescind the decision to boycott the election as such measure would be counter-productive. “I made him understand that in a situation where, for instance, there were two million registered voters, and in obedience to the call of IPOB, only 100,000 turned out to vote, whoever wins majority votes would be declared legitimately the winner and sworn in as the governor and that Anambra State might end up having a governor that was not really the choice of the people owing to the fact that while IPOB might preach boycott, the political parties with candidates would call upon their members and supporters to turn out and vote.
“As a political father in this part of the country, and indeed in Nigeria, I now call on the IPOB and its leadership to drop the idea of saying or doing anything that would disrupt the election and advise the people of Anambra State to come out peacefully to vote on the scheduled date.


“Without prejudice to the greater demand of IPOB, I warn that Anambra State should not be made a battle ground for the armed forces to have an opportunity to kill more of our youths. They have already killed so many without cause or provocation. On the other hand, if youths are called out to demonstrate or take any tangible action to disrupt the election, it will give chance to the Federal Government whose hatred for our people is not hidden to declare a state of emergency and impose a puppet ruler over us by force. I am making more efforts to get the leadership of IPOB to discuss for I believe that they are really patriotic and mean well.

Posted by mediacop
Labels: news
Email ThisBlogThis!Share to TwitterShare to Facebook
at 09:31