Menu
Home » »Unlabelled » EXPOSED!! Real Reason Why Nnamdi Kanu, Southerners Want To Break Away From Nigeria – Magu Revelation Will Shock You {Must Read}

EXPOSED!! Real Reason Why Nnamdi Kanu, Southerners Want To Break Away From Nigeria – Magu Revelation Will Shock You {Must Read} 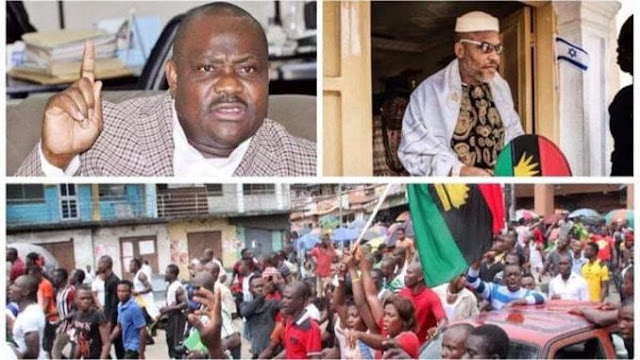 The acting chairman of the Economic and Financial Crimes Commission, Ibrahim Magu, has stated that the various agitations for secession in the country are caused by corruption
Magu noted that Nigeria’s main problem is corruption, and further blamed the menace for every evil thing happening in the country
The EFCC boss urged all citizens to expose corruption wherever it is found, as he stressed that we are all anointed to fight corruption Ibrahim Magu, the acting chairman of the Economic and Financial Crimes Commission (EFCC), ‎has blamed corruption for the various agitations for secession, strikes and civil actions in Nigeria.
According to reports, the EFCC boss made his comments while speaking on Wednesday September 13, at a parley with social media personalities in Abuja, the nation’s capital. Magu stressed that Nigeria’s fundamental problem was corruption; but he however insisted that the Muhammadu Buhari-led war against corruption is succeeding.


“I am telling you the primary thing is political goodwill. If the leader is committed to fighting corruption, nothing can stop us. “All these boys and girls crossing the Mediterranean to go to Europe is because of corruption‎.
“What we are saying is, let us do the right thing.‎ We should insist the right thing should be done. We all have a duty to. We are all anointed by God to fight corruption. “There are strikes here and there caused by corruption.


“If there is corruption in the EFCC, expose it. If I am corrupt, expose me. I can’t be corrupt and be fighting corruption.”

Posted by mediacop
Email ThisBlogThis!Share to TwitterShare to Facebook
at 09:32