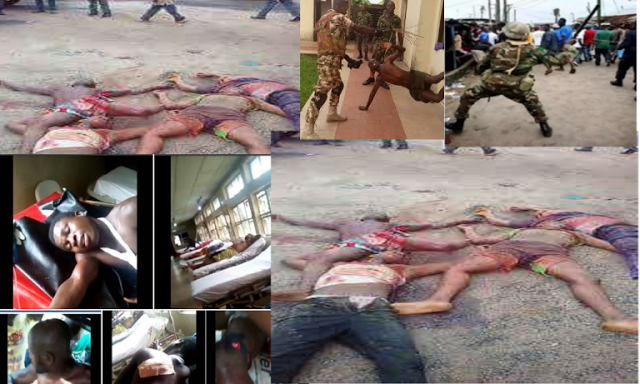 More than 20 Biafrans heading to Umuahia to show solidarity with the leader of Indigenous People of Biafra, Mazi Nnamdi Kanu as Nigeria soldiers lay siege on his home in Afaraukwu Ibeku, were rounded up and shot dead by the Nigerian Army.


On the evening of sunday, the 10th of September 2017, Nigerian soldiers went to the home of Nnamdi Kanua and killed 3 Biafrans and wounded dozens more. The following morning, the Nigerian army published a press statement denying the killings that were caught on camera. The Nigerian Army in characteristic manner, denied that they killed IPOB family member, rather, they claimed IPOB members blocked their way while they were on ‘Military Show of force’.

On Tuesday morning the Nigerian army turned Biafraland into a theater of war as they arrived with more than 50 trucks shooting indiscriminately.
This created an atmospere of war and pandemonium. Truck load of soldiers surrounded Kanu’s home. Hence Biafrans made their way to be with him. As a result more than 20 of them met their untimely deaths as soldiers shot an killed them.


As Biafrans from Aba and it’s environs were on their way to Umuahia today the 12th of September 2017, the Nigeria military stopped them, rounded them up and shot more than 20 persons dead on the spot. Many more others sustained various degrees of gunshot injuries.
There was also another report from Biafrans who escaped the killings on there way to Umuahia, according to the report, 2 Biafrans were killed at a checking point and the soldiers threw their bodies in the river.


Below is an interview with the Lawyer of Mazi Nnamdi Kanu.

Posted by mediacop
Email ThisBlogThis!Share to TwitterShare to Facebook
at 09:08