Menu
Home » »Unlabelled » Breaking News: “The ‘people of Biafra’ have every right to request for a referendum” – EU President

Breaking News: “The ‘people of Biafra’ have every right to request for a referendum” – EU President 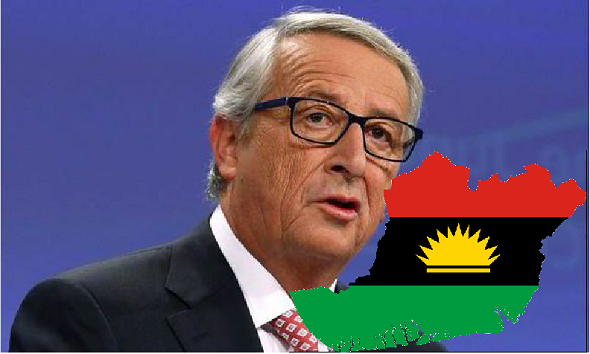 The people of Biafra are not terrorist and they have every right to request for a referendum, The President of the European Union said.
The European Union (EU) yesterday, condemned and rejected the unilateral classification of the Indigenous People of Biafra (IPOB) as a terrorist organization by the Nigerian Armed Forces.
The Defence Headquarters of the Nigeria Army on Friday declared IPOB a terrorist organisation, claiming that its members had become violent and a security threat in the country.
But the EU’s condemnation followed reported video footages of the brutal and inhuman activities of the Nigerian Army in the South-East region of Nigeria.
The videos showed various scenes of the invasion of communities, torture and killings of IPOB members, which have gone viral since the Nigeria Army launched its Operation Python Dance II to clamp down on the group agitating for selfdetermination.
President of the EU Commission, Mr. Jean-Claude Junker, who made the view of the Commission known, openly warned the Nigerian security personnel against what he described as their ill hearted and unprofessional handling of democratic issues and the rights of the people. Junker cautioned the Nigerian military chiefs that they must employ every democratic tenet to handle issues that concern the agitations of the citizens in Nigeria.
“It is the people’s right to agitate and make a request from their government; self-determination is a right enshrined in the United Nation Charter. The people of Biafra have every right to request for a referendum, they have been in this struggle for a while now they have never killed or shot a bullet instead they are the victims of attacks and murder.
“The entire EU hereby condemns the brutal attack on IPOB members and leadership under the pretentious disguise of a military exercise (Operation Python Dance). The Nigerian military is warned to adopt democratic tenets in handling citizens.


The EU will not sit and watch things go undemocratic in the largest economy of the West African region,” he warned.
Junker promised to raise the issues concerning the peoples’ request for a referendum among the caucus of the EU, stating that the Biafra request for a referendum was not different from that of the Catalonians in Spain and the Scots in Britain.


We have no doubt that the undisclosed reason for deploying troops to south eastern states by the President Buhari-led administration is to attack unarmed and defenceless members of the Indigenous People of Biafra who are merely exercising their constitutional guaranteed rights to self-determination,” the letter said.

Posted by mediacop
Email ThisBlogThis!Share to TwitterShare to Facebook
at 07:33