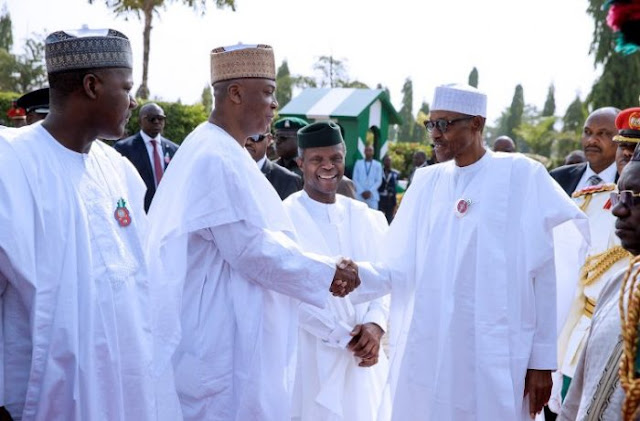 The Presidency has finally bowed to pressure, by reaching out to the leadership of the National Assembly, we learnt.
Reports revealed that Acting President, Yemi Osinbajo, met with Senate President, Bukola Saraki, on Sunday night, for the purpose of mending fences and charting a new course.
The meeting, was upon pressures by some Senators and Members of the House of Representatives, to bring forward their annual recess, as a way of teaching Osinbajo a lesson.
“If the National Assembly goes on recess without confirming those nominees, or the President getting National Assembly approval for those strategic loans needed for key infrastructure projects, how can Osinbajo


The meeting between Osinbajo and Saraki, is in the wake of claims that a section of the alleged cabal in the Presidency, had teamed up with some Members of the National Assembly, to cut Osinbajo to size.
However, the success of last Thursday’s meeting before the one held on Sunday, was nearly beclouded by the leakage of the secret meeting by those sympathetic to the cabal in the Presidency.
“You can see that vested interests do not want Osinbajo to succeed, and the same forces were the ones who leaked the meeting, with the intention of embarrassing the two men”, a source privy to the development said.
Speaking on the reconciliation moves, a source added: “Osinbajo has perhaps realised his mistake, and that he should not have spoken on the Magu issue, and now everyone is trying to use that against him.”


“The fact is that they want to make life difficult for the Acting President, who out of his own lack of political tact, voiced support for Femi Falana’s claim on Magu”, the source said.