Menu
Home » news » Yes! Evans Will Die By Hanging; Here’s Never Told Story Of How Ogechi, The Only Lady In His Kidnap Gang Unbelievably Nailed Him Today (With Photos)

Yes! Evans Will Die By Hanging; Here’s Never Told Story Of How Ogechi, The Only Lady In His Kidnap Gang Unbelievably Nailed Him Today (With Photos) 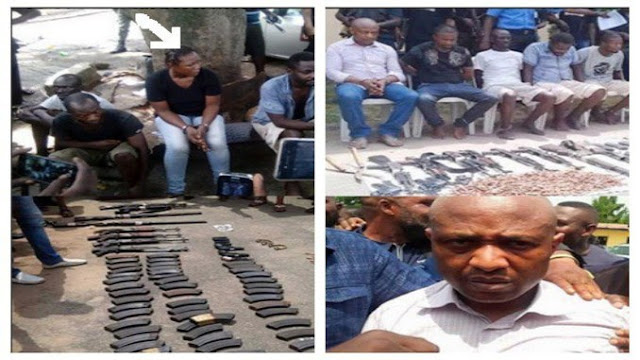 The Nigerian Police Force made good its promise to parade Nigeria’s billionaire kidnapper, Chukwudi Dumeme Onuamadike, alias Evans and members of his gang, revealing their victims and the ransom collected at various times. Most shocking, the police also unveiled a woman, Ogechi Amadi as one of the gang members…
“Ogechi Amadi is the woman who rented the house and cooks for the kidnappers and their victims in the camp”, the police said.
Evans, the kingpin was arrested in his mansion in Magodo estate in Lagos on Saturday by the police Joint Special Forces led by the Intelligence Response Team, the Lagos State Police Command’s Anti-Kidnapping Unit and Technical and Intelligent Unit of the Force under the supervision of the Commissioner of Police, Lagos State.
The police described Evans, a native of Nnewi, “as the vicious leader of a highly organised kidnap-for-ransom syndicate and criminal gang terrorising and responsible for several kidnap of notable/prominent Nigerians in Lagos State, including the Western, Eastern, South-South and some Northern States”.    “He has his gangs active and spread across these mentioned states”, the police said. “After an intense gun battle that lasted several hours, Chukwudi Dumeme Onuamadike and his gang were overpowered by the Superior Fire Power of the Joint Special Forces and he was arrested at Magodo Estate, in Ikeja Lagos.
“Chukwudi Dumeme Onuamadike a.k.a EVANS was first declared wanted in August, 2013 when he masterminded the attempted kidnap of CHIEF VINCENT OBIANUDO, the owner of Young Shall Grow Motors in Festac, Lagos, where a Policeman attached to the victim foiled the attack and killed three three of Evans gang members but also lost his life in the process.


Some of Evans gang members were subsequently arrested, but he regrouped after with several gangs and became more vicious and unleashed terror in the mentioned States of the Federation. ” Evans and his gang keep their victims kidnapped in Lagos Area at House No. 21 Prophet Asaye Close New Igando, Lagos State until the ransom is paid to him.
“Ransom money are paid to him in Millions of Dollars, some victims are kept for upward of six to seven months until the last penny is paid. He never reduces his tagged ransom money.   None of his gang members knows his house. MODUS OPERANDI “In every kidnap attack he has a separate armed group that kidnapped victim with him and has another armed group who takes over the victim to their hideouts and prevent them from escaping.
The members of the two ‘2’ groups don’t know each other. They complied with Evans instructions. “Evans, and the dreaded vampire who died during a gun duel with the Police Special Forces led by IRT and Imo State Police Command in a forest in River State early this year are axis of evil in kidnappings in Southern Nigerian States and some Northern States. This is a huge success for the Nigeria Police Force.
The Force will build on this success and continue to prevent kidnap cases and criminality generally in the country, and ensure prompt detection of those crimes that cannot be prevented, and also ensure that perpetrators are arrested, investigated and prosecuted”.
PROPERTIES OWNED BY EVANS:
The Police said Evans has two (2) Mansions in Magodo GRA Phase 2 worth about three hundred million naira (N300,000,000). He also has two (2) House in the Highbrow area of Accra City in Ghana among many other properties such as exotic cars, expensive watches, Jewelries e.t.c, he bought from the ransom.   EVANS GANG MEMBERS:
* Felix Chinemerem 36yrs Native of ArichukwuOhafia LGA of Abia State second in command of Evans. * Nwosu Chikodi Chukwuma aka Sudo 42yrs, 3rd in Command to Evans. He has over 20yrs experience in Armed robbery and about 8yr experience in Kidnapping.
*Uchechukwu Amadi, Native of Anambra State longtime Evans Boy and head of the detention Camp in Igando. * Ogechi Amadi is the woman who rented the house and cooks for the kidnappers and their victims in the camp. * Suoyo Paul aka Nwana 42yrs Native of Bayelsa States Gangmember and Supplier of Rifles and Ammunitions to Evans. * Ikenna Emeka 28yrs Native of Anambra State.
EVANS VICTIMS IN LAGOS:
* Mbarikatta William Uboma, 35, kidnapped June 16th, 2012 at about 11.am on his arrival from Hungary while he was close to his house. He was in his Toyota Car 2010 model in company of his brother to drop him at his house when a Passat car emerged from nowhere and blocked his car.
They blindfolded him and forcefully abducted him to an unknown destination. They later demanded a ransom of N10M. However, N2M was later paid while they collected other personal accessories. He was finally dropped at Okota on the third day.    * Paul Cole, 34, from Ohafia in Abia State. A Director with Ocean Glory Commodities, Apapa, kidnapped August 3rd, 2012 at Festac Town together with his General Manager, Jude Ugoje and another staff, PiriyeGogo, and taken to an unknown destination.
They demanded for N10M. On August 6th2012, they collected N5M ransom at Maza-maza area of Lagos State. * Mohammed Jamal, 22, a Lebanese, kidnapped on August 19, 2012 at Ajah by three armed men, taken away blindfolded. N7M ransom was later paid at Ojo Barracks.
* Kingsley Nwokenta, 34, kidnapped September 19, 2012 after he left Lebanana Bar in Festac at Mile two under bridge. Later, paid N1.5M ransom while they made away with his black Toyota Venza and other accessories. * Anthony Ozoanidobi, 41, kidnapped in October 10th 2012 along Marwa Road Satellite Town.
Ransom of N1.5M paid after which he was released at Apple Junction, Amuwo-Odofin. * Leo Abraham 58, kidnapped August 20, 2012. Paid ransom of N5M and was later released along Badagry road, Lagos. * Ojukwu Cosmas, 45, sells Toyota parts at Aspanda Trade Fair. Kidnapped January 21, 2016 at Festac Town. It was not clear when and how he was released.
* James Uduji; kidnapped close to his house at 7th Avenue Festac late last year. Held for 6 six weeks. Paid $1M. * Chief Raymond Okoye – Odu- Na –Ichida, kidnapped 2015. Paid $1M as ransom, held captive for 2months
* UcheOkoroafor, trader at Alaba, kidnapped 2015, held captive for three (3) months, paid $1M.   * Elias Ukachukwu kidnapped November 2015. Paid $1M. Date of release unknown but it was gathered that his abductors were insisting on another $1M claiming family members were rude to them during negotiation. * Francis Umeh also a spare parts dealer at Aspanda, kidnapped July 2016 at Raji Rasaki Estate, released after two months in captivity.
* The last Victim is Mr Donatus Duru. He was kidnapped in Ilupeju February 2017 and fortunately the man escaped from the Igando House where Evans kept him with his boys last month. Police said during interrogation and preliminary investigation, Evans and his gang confessed to all the kidnappings linked to them and made confessional statements on the various roles they played in the commission of the crimes.


They will be charged to court on completion of investigation, police spokesman Moshood Jimoh said.

Posted by mediacop
Labels: news
Email ThisBlogThis!Share to TwitterShare to Facebook
at 10:05