Menu
Home » news » Why I Recruited Military Men In My Kidnap Gang - Evans ...I Got Just N6.5m Only From Operations - Arrested Soldier

Why I Recruited Military Men In My Kidnap Gang - Evans ...I Got Just N6.5m Only From Operations - Arrested Soldier 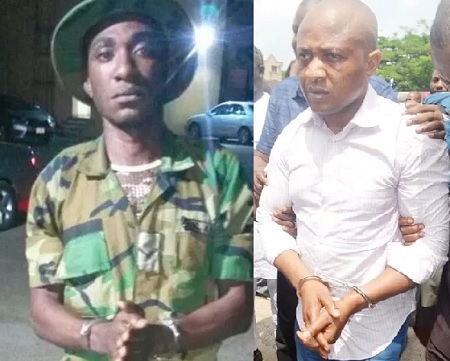 Evans, the notorious kidnap kingpin whose real name is Chukwudidumeme Onuamadike said he recruited serving military men as part of strike force in his kidnap gang because of their expertise in arms handling and in order not to shoot innocent persons during operations.


This is even as the soldier, Lance Corporal Victor Chukwunonso who is one of the strike force of the kidnap syndicate arrested on Friday,admited he belongs to the syndicate.
Chukwunonso revealed his arm of the kidnap gang was charged with the responsibilities of abducting victims and taking them to an exchange camp, from where the receiving team would pick victims to their detention camps.


Unsuspecting Lance Corporal Chukwunonso, who is attached to the Nigeria Army Band Corps, Abalti Barracks, in the Surulere area of Lagos, was arrested at about 9pm on Friday, in the Ojo area of the state, from where he was subsequently taken into police custody.
During investigation, Chukwunonso, as reliably gathered, admitted to have only gone on three kidnap operations with Evans. He disclosed that he got a total of N6.5 million from the operations.


He revealed to policemen that all the operations were carried out in Festac, Lagos. He claimed to have been given N3milion from the first operation, N2 million form the second and N1.5million from the third.

Posted by mediacop
Labels: news
Email ThisBlogThis!Share to TwitterShare to Facebook
at 10:15