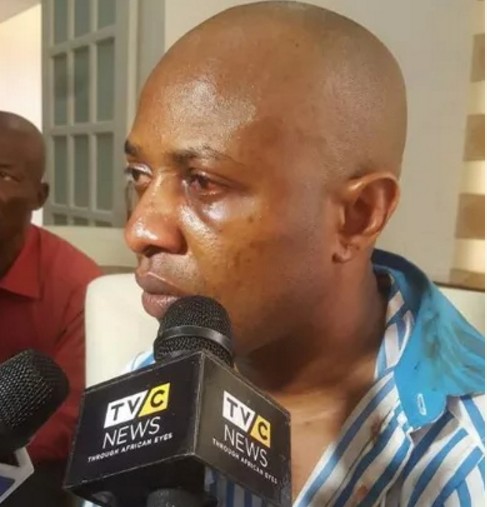 Billionaire Kidnapper, Chukwudubem Onwuamadike, popularly known as Evans was last week arrested by the Lagos state police command.
Since his arrest, the man, believed to be the richest kidnap kingpin in Nigeria, has been making so many revelations.
Here is a full interview with the wealthy kidnapper, who is now cooling his feet in the custody of the State police command as posted by Channel TV.
Evans has also revealed how two of his gang members were shot dead while attempting to kidnap the owner of The Young Shall Grow Motors, Vincent Obianudo, in August 2013 at Festac, Lagos.
Ques. Where did you start kidnapping?
Ans. I started in Anambra then I came to Lagos.
Ques. How many jobs did you do in Anambra?
Ans. The truth of the matter is that I did not do anything in Anambra. Anambra can check the record of it. In Edo state it was like about three times.
Ques. Who did you kidnap in Edo State?
Ans. I don’t know their names. I know about (not very clear). I know the people that do the thing. That time, they said they did not collect N100 million, that what they collected was N50 million.
Ques. When did you move to Lagos?
Ans. I moved to Lagos in 2013.
Ques. Who did you kidnap in Festac, Lagos?
Ans. I don’t normally know names. But when I see someone that I know I will, you understand. Because sometimes something will happen, you will not know the name of the person.
Ques. How did you identify a rich individual?
Ans. Anybody that is rich, you will know that he is rich. I have people that give me information. I don’t know where they are right now.
Ques. How did you meet your boys?
Ans. Each time I want to go for operation I will call them on the phone like let’s meet in so and so place before we start going for the operation.
Ques. Where did you get the military uniform you use for your operations?
Ans. I no get army uniform.
Ques. How many of you normally go for an operation?
Ans. Three or four.
Ques. How did you get your victims away?
Ans. We would carry the man put inside motor and go.
Ques. How did you get into a victim’s House?
It is maybe along the road.
Ques. So you wait for your victims to come out?
Ans. Yes.
Ques. What is the most expensive ransom you have collected?
Ans. The highest money we have collected is from somebody living in Festac, $1 million.
Ques. Why did you keep your victims for months and where?
Ans. Just because they are wasting time. Because when you are wasting time you have to wait for the money to be complete. We have people that are feeding them.
Ques. Where did you keep your victims?
Ans. Just one. It is around Igando area. It is a rented apartment.

Ques. What are names of the boys that watched over the victims?

Ans. The name of the boy is Uche. They are two. I can’t remember the name of the second person. He is an Igbo boy. He is from Aguleri. His name has escaped me but I will remember.

Ques. Every month?
Ans. Every operation. Sometimes above that.
Ques. Your second in command, how much do you give him?
Ans. It depends on the money we make.
Ques. Who goes to collect the ransom?
Ans. I can make the call but they can go and collect it. When they bring the money we have to share it. All of us.


Ques. How many of you?
Ans. Like six.
Ques. You have boys in each state?
Ans. Yes. It is those people I have in Lagos. I don’t have boys in Edo and Anambra.
Ques. If you want to go and kidnap in Edo, what do you do?
Ans. It is by phone call. That was that time we made phone calls then we gather together.
Ques. Where do you meet?
Ans. We can meet along the road and ask them to pick you up.
Ques. Tell us about your family. Your mom, your sisters, do they know what you do?
Ans. As for my mom, my mom don’t know what I do like that. I normally see her once in a while. But as a human being she knows not that she is in support.
Ques. What of your sister is she in Lagos? Does she know what you do?
Ans. My sister, No.
Ques. How much did you buy the house?
Ans. I bought it for N130 million.
Ques. From whom? From an individual or a company? When did you buy it?
Ans. From an individual. I bought it last year. I was living somewhere around here.
Ques. How many houses do you have in Magodo?
Ans. It’s two houses.
Ques. How many houses do you have in Ghana?
Ans. I have two. I built it myself. It is N15 million each. It is a duplex. I don’t have house in Canada.
Ques. How do you feel about killing people?
Ans. It is not me that killed. I don’t kill.
Ques. Do your boys kill?
Ans. I will not know. If somebody dies there I don’t know.
Ques. How about the Young Shall Grow incident?
Ans. That day I was driving.
Ques. You drove your boys? How many of you were there that day?
Ans. Five.
Ques. How many of them died that day?
Ans. Two.
Ques. What happened to them?
Ans. They got shot.
Ques. In the Young Shall Grow Operation, who fired gun?
Ans. I was driving. It was Uche and Hunchman and Nnamdi.
Ques. How do you sustain this injury? (Camera zooms to a huge scar on Evans’ shoulder)
Ans. It was when I was doing drug business in South Africa. That was where I got the bullet wound. Somebody shot me.
Ques. How many countries have you worked?
Ans. Only South Africa and Ghana.
Ques. When you get your ransom, where do you spend it?
Ans. I spend it in Nigeria. I have not travelled since 2007.
Ques. What message do you have for your children?
Ans. I don’t have any message for them. I believe God will take control. My advice is that anybody that is doing

Posted by mediacop
Labels: news
Email ThisBlogThis!Share to TwitterShare to Facebook
at 09:28