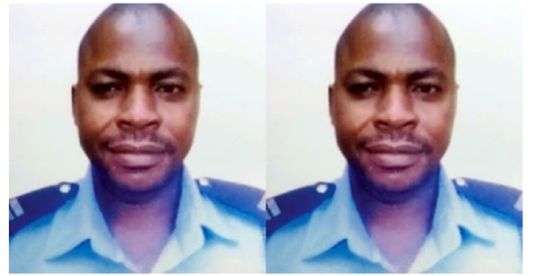 In a tragic finality to the case of a police inspector with the Lagos State Police Command, Musa Sunday, who went missing while on official
duty in November 2016, his body has been discovered in a shallow grave in Akodo, Ibeju Lekki area of Lagos.
But his family said many questions remain unanswered.
The body, which was found in a bushy area some metres to the road connecting Akodo, Ibeju Lekki, Osoroko and other communities of the area, was in a stage of advanced decomposition.
Saturday PUNCH learnt that the authorities of the Lagos State Police Command had contacted the family to inform them that some residents had found his body.
When it was time to retrieve it, the family went along with a police team and a pathologist from the Lagos State University Teaching Hospital.
On arrival, a resident of the community took the team to the spot where the deceased was buried and the sight shocked members of the family.
His legs and arms were tied while his head was wrapped in a cloth.
However, the family recognised the clothes on him: a jeans trousers and a shirt.
Saturday PUNCH learnt that the police had called for a DNA test, for which a sample has been collected from one of Sunday’s family members.
The pathologist has said the body would be ready for release to the family in the next three weeks after the conclusion of the DNA test and forensic examination of the body.
Saturday PUNCH had reported how the family had received no news from police authorities about the fate of Sunday.
The police inspector was said to have been detailed to lead two other policemen to Akodo in Ibeju Lekki, Lagos to resolve a land dispute between two communities in the area.
“They were deployed there to maintain peace in that area. We learnt that when they got there, the hoodlums were attacking a man, so they moved closer and rescued the man. He then told the other two policemen to go and put the man in the car so he could be safe. Before they came back to where my husband was, the hoodlums had pounced on him and taken him away,” Sunday’s wife, 27-year-old Halimat, said.
Saturday PUNCH also reported two weeks ago when his rifle was recovered.
Again, residents of the community were the ones who found and returned the service weapon of the 45-year-old father of four.
Six months after Sunday’s disappearance, the police have not arrested any suspect in the case.
The family have pieced together some of the information in the case and concluded that a lot are not adding up.
The missing policeman’s cousin, Mr. Jonathan, who was among the group, which retrieved the body told Saturday PUNCH that he does not understand how the police do not have any suspect in custody yet.
He said, “His service rifle was found and returned by members of the community. Who found it? Who also found his body? Are we saying nobody in the community knows anything at all?


“Somebody brought the rifle, he was not arrested and questioned. One Aree showed us where his corpse was hurriedly buried but he is walking freely without being questioned.
“A high chief from the community had approached the family attempting to settle the family with N2m. Where on earth will this kind of thing happen and the perpetrators will be so bold to come up with a compensation plan. If this can happen to a serving policeman deployed to maintain peace, then what is the hope of a common man in this country?”
However, Saturday PUNCH learnt while Sunday was missing and efforts were being made to locate him, his aged mother in his hometown in Kogi State was notified.
The family said after his body was found, the woman was notified but fainted immediately.
“She has not been totally responsive since then. We are praying to God for her life and also taking care of her.”
When our correspondent contacted the spokesperson for the Lagos State Police Command, Olarinde Famous-Cole, on the new development on the case, he explained that investigation was still ongoing but that even though he had not been officially briefed on the investigation, he was aware that some suspects were still on the run while some have been arrested.