I Financed BIAFRA Agitation - Evans Opens Up Again, Reveals Nnamdi Kanu's IPOB, Radio Got Millions As Aid From Him 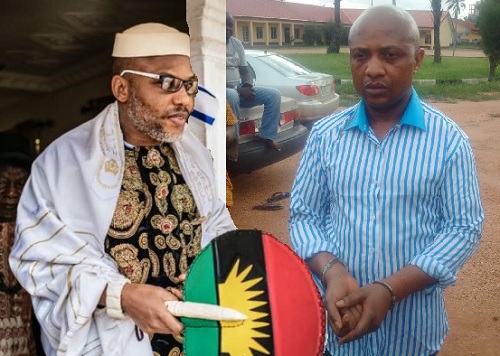 An unconfirmed report by online news blog, has claimed that the notorious billionaire kidnap kingpin, Chukwudumeme Onwuamadike, a.k.a. Evans had confessed to the police how he sent millions of naira to Nnamdi Kanu’s Radio Biafra.
The online Newspaper quoted a reliable police source who pleaded anonymity because he was not authorised to speak to the press as saying that Evans confessed he has allegedly donated heavily in promoting radio Biafra and the Nnamdi Kanu led Indigenous People of Biafra [IPOB].
The Kidnap kingpin was also quoted to have made a shocking revelation that he has donated over 10 million Naira to the group since 2014.
According to Elomba.com, Evans was quoted to have said his last donation to the group was allegedly $5,000 in June 2015 and that he was allegedly in touch with IPOB leaders until he was arrested.
According to the insider, Investigations are ongoing and the Inspector General of Police (IGP) is leaving no stone unturned in ensuring those who benefited from Evan’s magnanimity are arrested and every penny recovered.
The IGP has also promised that Evans will soon be arraigned and prosecuted once investigations are completed


Meanwhile Evans, on Wednesday filed a fundamental rights enforcement action before the Lagos Federal High Court in Lagos, urging the court to order the police to charge him to court or release him immediately.
Joined as respondents in the said suit marked FHC/L/CS/1012/2017 are the Nigeria Police Force, Commissioner of Police, Lagos State and the Special Anti-Robbery Squad, Lagos State Police Command.
In the suit filed on his behalf by a Lagos-based lawyer, Olukoya Ogungbeje, the suspected kidnapper is seeking a court order directing the respondents to immediately charge him to court if they had any case against him in accordance with sections 35 (1) (c) (3) (4) (5) (a) (b) and 36 of the Constitution.
He is on the alternative seeking for an order compelling the respondents to immediately release him unconditionally in the absence of any offence that will warrant his being charged to court.
Evans is contending that his continued detention by the respondents since June 10, 2017, without being charged to court or released on bail was an infringement on his fundamental human rights.
The suspected kidnap kingpin who had evaded arrest for a long time, was eventually arrested at his Magodo Estate home in Lagos on Saturday, June 10, 2017 after an intense gun battle between his gang and special detachments of the Nigeria Police Force.


The 36-year-old kingpin has also revealed his involvement in drug trafficking and robberies.

Posted by mediacop
Labels: news
Email ThisBlogThis!Share to TwitterShare to Facebook
at 10:42