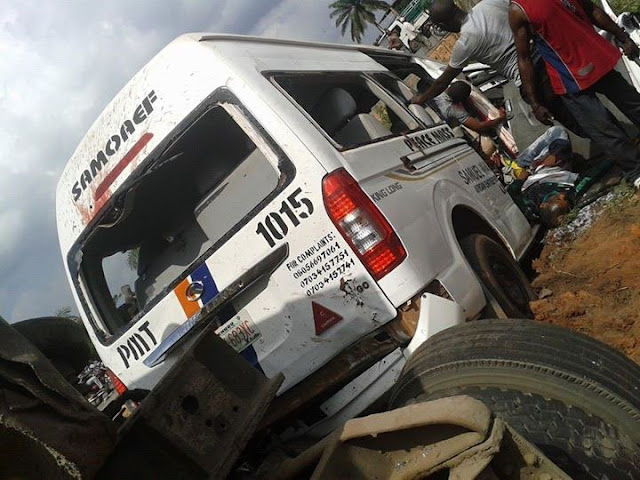 TRAGEDY struck at Ebe/Egede along Enugu/Markudi Expressway on Monday following a multiple accident involving a Mercedes Benz truck, a diesel vehicle and a Toyota car killing seven persons on the spot and injuring 12.
As at time of going to press, the cause of the accident was sketchy but a source said that the auto crash might not be unconnected with over-speeding by one of the vehicle drivers coupled with bad road.


Confirming the story, the State Police Public Relations Officer, Ebere Amarizu, said “the Mercedes benz truck with registration numbers: AA 365 ARD with one MAN DIESEL Truck with registration number XA 828 PKN and a Toyota Bus with registration Numbers: YD282 collided”
Amarizu said that a full scale investigation has commenced on the incident while the injured  persons have been taken  to a nearby hospital, adding that the bodies of the deceased have also been deposited at the Eastern Nigeria Medical Centre mortuary, Enugu.

Posted by mediacop
Labels: news
Email ThisBlogThis!Share to TwitterShare to Facebook
at 09:52