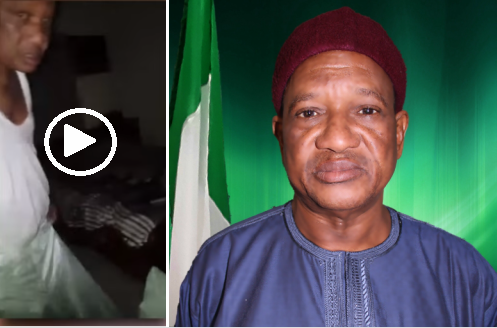 Below is shameful video of serving Nigerian SenatorBukar Abba Ibrahim who was former Governor of Yobe state and husband of Nigeria's minister of state for Foreign affairs involving two women in sex.

In the video, Senator Ibrahim who represents Yobe East Senatorial District at the Nigerian senate was seen in a dingy hotel room apparently putting on his clothes after having a romp with two young women whose identity remains unknown, although the woman filming the encounter briefly showed her face.

SaharaReporters learned that the young woman who submitted the video did so to save her life. It was learned that while Senator Ibrahim was the governor of Yobe state, he had a similar romp with a high school girl between him and the commissioner of police in the state at the time, the girl reportedly disappeared and was never heard of again. He reportedly used his position to cover up the disappearance of the young lady.


Posted by mediacop
Labels: news
Email ThisBlogThis!Share to TwitterShare to Facebook
at 09:47