BREAKING: King Of All Kidnappers; Evans Finally Released – Asked To Go Home And Sin No More, Photos As He Leaves Police Custody Yesterday 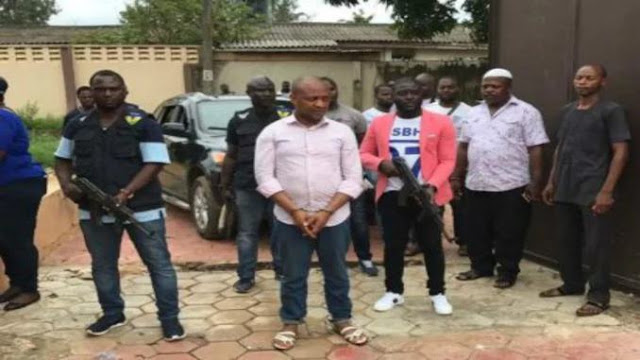 A source has on Monday, narrated how the arrested kidnap kingpin, Chukwudi Onuamadike, alias Evans, was released and criminal charges against him dropped, when he was arrested in 2016, for armed robbery.
The News Agency of Nigeria, NAN, made this shocking disclosure, as investigations on Evans’ past activities deepened.
It was gathered that Evans and his robbery gang, in 2006, attacked a commercial bank in Lagos, and went somewhere around the National Arts Theatre, Iganmu, to share the loot.
While sharing the loot, the robbers had a disagreement and shot one another. Seven members of the gang died instantly.
“The then Divisional Police Officer of Iponri Police Station, Yahaya Bello, now a deputy commissioner of police, said there was a serious incident involving some persons who shot at one another. He said about three of them had been arrested.
“One of the members of the gang arrested then was Chukwudi Onuamadike, popularly known as Evans. If you look at his chest, I cannot remember whether it is the right or left side, there is a scar. It was as a result of the gunshot from his gang members that day.
“He bled and there was no way he could run away before the police came. The case was transferred to the Lagos State Anti-Robbery Squad. We investigated and discovered that they were armed robbers.
“Evans led the team. We also went to Mbidi Police Station, Imo State, to carry out an investigation on them. We were able to arrest two other members of the gang. We then had five of them in police custody.
“There was a policewoman at the Band Section of the Police College, Lagos. She was known as Tina, a Superintendent of Police. She insisted that we should drop the case and that Onuamadike (Evans) was her brother.


“But when she was unable to achieve her aim, she travelled to Imo State. Not long after, we got a message from the Imo State Police Command that they had been searching for Evans and asked us to transfer the case to them so they could continue from where we stopped.
“Since that time, we did not hear anything. We heard he was later released there”, the source said.
The source noted that after he saw Evans’ pictures, he knew that he was the man they arrested alongside members of his gang, in 2006, stressing however, that Evans was not bearing the alias, Evans, at the time.
“We identified him only as Chukwudi. Some of the persons we worked together on the case also called me to draw my attention to the fact that he was the one arrested.
“He couldn’t have been the only person released. The request was that we should transfer the case to them. We sent him and two members of his gang to the command. There is a hotel in Okota area where they used to meet to share their loot.
“The owner of the hotel was their friend. There was a time they robbed three banks in Alaba International Market in 2005. They also looted shops there. One of the owners of the shop complained to the police and we carried out an investigation.
“We discovered that some of the items stolen in the man’s shop were digital cameras. We traced the cameras to the hotel and into the office of the hotel owner. It was then that ‘big men’ started calling from everywhere that we should drop the charges against them.
“The owner of the hotel was later killed by the robbers, following a disagreement. His body was dumped by the roadside in one of the states in the East sometimes ago”, the source told Police investigators.
The source expressed fear that if Evans was not properly investigated and prosecuted, he could form a terrorist group, being a hardened criminal; in view of the fact that he collects any ransom demanded to the last Kobo, before releasing such victims.
“The best way to handle his case is for the police to do their work. They should do a proper investigation. If it will take four months to investigate him, they should do so. He has links in South Africa, Ghana, etc.


“I know him. Bank robbery and hijacking of bullion vans was easy for him and his gang members. He did not hesitate to shoot any member of his gang suspected of foul play”, the source noted.

Posted by mediacop
Labels: news
Email ThisBlogThis!Share to TwitterShare to Facebook
at 10:18