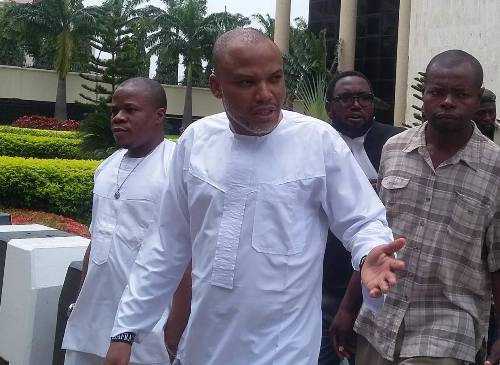 The leader of the Indigenous People of Biafra has said he been offered many enticing offers to make him forget the struggle for Biafra.
The tempting offers include the Vice President of Nigeria, oil wells and so many other things.
He was reacting to claims that the Anambra governor Willie Obiano offered him two Prado jeeps and $50 million.
Commenting on the sit-at-home which he said recorded 100% compliance, he said was not targeted at discrediting Igbo political leaders, including governors of the region.
He made the clarifications through the founder of Igbo Youth Movement (IYM), Evang.
He said: “Nothing like that happened, and if you know Kanu well, you would know that he cannot accept such gifts if they ever have the courage to come to him. I asked him and he told me it is not true, and I believe him; I have no reason not to believe him.”
On the sit-at-home order, the IYM founder said:  “Kanu told me about the sit-at-home while he was still at Kuje Prison, and that was in the first week of April.
“There were reasons why he wanted it; one, to send a message to the doubting Thomases that his struggle over time has positively resonated with our people, and that our people are solidly behind him…”


“Two, to counter liars who were saying that the people were not with him, to counter them so that the world will know that IPOB is the mainstream group, mass movement, the largest mass movement ever and then the third reason was to prepare our people for an eventual coming together, to prove to the world that our people can come together and stand as one. Trying to discredit political leaders or show that they are irrelevant wasn’t one of the reasons. Another of the reason he planned it then was that it will help put pressure on government to grant him bail.“When he came out from Kuje he told me that, that same sit-at-home will still go ahead on the 30th. Now some people are erroneously thinking that the sit-at-home was targeted at Igbo political leaders to discredit them, no, no there is no such thing.
“The five South-East Governors are great men who are doing well. Governor Ugwuanyi in Enugu is a very humble fellow who is carrying everybody along and you can see his developmental strides in Enugu. The Chairman of the South-East Governors Forum, Governor Dave Umahi is a wonderful gifted young man who is doing excellently well. A humble fellow who tried in 2015 December to bail Nnamdi Kanu, and these Governors are our political leaders and we respect them and Nnamdi is desirous to meet and chat with them and get along with them.
“The Igbo Legislators are doing their best under difficult circumstances; our Governors in particular are facing very difficult political circumstances. So the sit-at-home was not designed to rubbish anybody. Nnamdi does not want to enter into any confrontation with anybody, he rather want to work well with everybody. Just about 30 minutes ago he met with President General of Ohaneze Ndigbo, Dr. Nnia Nwodo and they had a very cordial meeting. Nnamdi is a humble fellow, he is not arrogant and he means well for our people.

Posted by mediacop
Labels: news
Email ThisBlogThis!Share to TwitterShare to Facebook
at 09:55