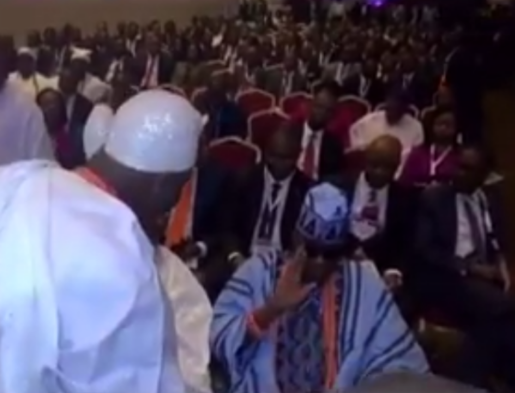 Oba of Lagos, Oba Rilwan Akiolu, Thursday evening, cleared the air on the video that showed him snubbing the Ooni of Ife, Oba Adeyeye Ogunwusi, at a public function in Lagos.
Oba Akiolu said his gesture was not ‘snub’ as being dubbed but that it was the culturally acclaimed way of greeting a monarch in Lagos.
Oba Akiolu has received several knocks over the incident.
Oba Akiolu spoke through by one of the white cap chiefs of Lagos, Lateef Aderibigbe Ajose, who is the Opeluwa Onido of Lagos.
Ajose said the Lagos monarch did not ignore Ooni of Ife at the public function as being misconceived by people.
He said Oba Akiolu’s response to Oba Ogunwusi was the culturally acclaimed way of greeting a monarch in Lagos.
He added that the Lagos King is basically trying to revive the culture and tradition of ancient Lagos, which is peculiar to the State.
Other tribes also have their peculiar ways of greeting, he said.
Ajose stated: “The sign by Oba Akiolu signifies ‘inu mi, inu e’, the culture of greeting in Lagos.
“If Oba Akiolu wanted to ignore, he would have turned his face away from Oon


“There is no misunderstanding between both highly revered monarchs in Yorubaland.”
According to Ajose, the relationship between both Yoruba kings is peaceful and mutual.
He said: “Oba Akiolu was well represented at the coronation of Ooni of Ife, which attested to the fact that he does not disregard the office of Ooni Adeyeye.”
Chief Ajose said Oba Akiolu had waited till this time to react to the issue because he had to meet with other chiefs in the palace to rub minds before addressing the public on the matter.
He said: “There is no sentiment in the culture of Lagos. As we met it, that is the way we are doing it.
“Kabiyesi Oba Akiolu is trying to bring back the old pattern, the old culture we have left behind.
“What happened that day was wrongly speculated by the social media to disrupt peace and order and misinterpret Oba Akiolu’s action.
“We just want to appeal to the social media to stop spreading wrong information.
“They should try and understand the reason behind every action carried out, most especially by traditional rulers. “Yoruba has a very rich culture.


“There is no quarrel between the Oba of Lagos and Ooni of Ife.”

Posted by mediacop
Email ThisBlogThis!Share to TwitterShare to Facebook
at 07:14