VIDEO!! Apostle Suleiman’s Wife Breaks Silence On S*x Scandal, You Will Be Shocked 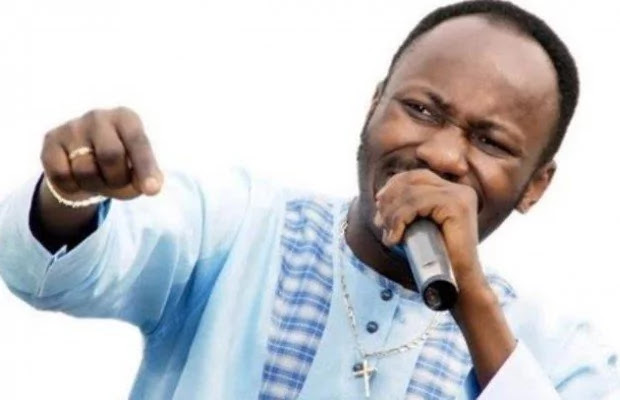 Lizy, wife of the senior Pastor of Omega Fire Ministry, Apostle Johnson Suleiman has opened up on the alleged sex scandal involving her husband and a certain Stephanie Otobo.
Suleiman is being accused by Miss Otobo of impregnating and abandoning her.
Reacting to the ongoing drama, Mrs. Suleiman described the purported photos of her husband as fake.
In a video posted on her Facebook wall, she said Nigerians were gullible and could believe anything.
She said, “I don’t like media appearance but for the purpose of clarity, I have to speak.
“I have known my husband for the past 19 years and if you are living with a man who is promiscuous or adulterous, you will know, especially if you are an intelligent woman.
“I have to appear like this to address this because it is a woman-to-woman talk.
“I have heard all kinds of rubbish and the nonsense this lady has been talking about that has gone viral on the internet.
“For the 19 years that I am married to my husband, even while we were courting, we had never had any issue over any woman


“For all the pictures that have been released, you can release more but it will never replace the picture of my husband in my heart.
“As you can, those pictures were photoshoped. By the grace of God, I am a trained journalist, a mass communicator.
“Nigerians are so gullible because they believe everything.”

Posted by mediacop
Labels: news
Email ThisBlogThis!Share to TwitterShare to Facebook
at 03:51