UNBELIEVABLE!! Read The Scary Story Of A 27yrs Old Mortuary Attendant Who Reveals His Nightmares After Preparing Corpse For Final Burial {Photo} 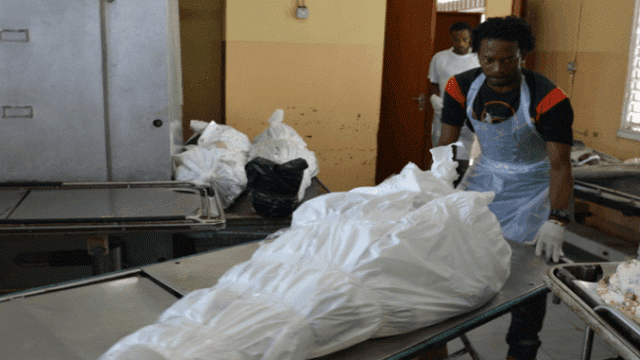 He remembers with nostalgia the first time he treated a body for preservation at the age of 14, the way he shook with fright thinking the dead person would come back to life. the teenager then in standard six frightfully but skillfully made the ‘six point’ injections on the cadaver.
This entailed injecting six crucial parts of the body with formalin, a preservative to keep it from decomposing awaiting burial. But as much as Subisuso Chebii was scared and stiff, this was the moment he has been waiting for and he was glad his grandfather gave it to him.
Chebii said: “My grandfather was both the village veterinarian and mortician and I was always intrigued at how he could be able to help preserve a body until burial. I had an itch to learn and discover the mystery behind the whole thing.”
One that fateful day, he narrates, his grandfather now deceased took him to a homestead where someone had died and asked everyone to leave the house. “He had told me earlier, “Chebii, today you will do it, you will do it” but I though he meant I would help him in one of his veterinary jobs,” the now accomplished mortician recalls.
The old man then prepared the chemicals, removed the syringes and suddenly left the room and locked Chebii in together with the corpse before telling him to go ahead and do as he had taught him.
More than 10 years later following that watershed moment at a village in Busia, Western Kenya, he is now a fully-fledged mortician at Nairobi’s Chiromo Mortuary otherwise known as Chiromo Funeral Parlor.
Chebii is also a musician whose stage name is ‘Siso the Mortician’ and has released several songs and hopes to record another track this year, as he specializes in rap songs. He studied Mortuary Science at the University of Nairobi and has worked on several other places before landing a job at Chiromo.


Chebii says his first love was being a vet but human bodies used to and they still do ‘excite’ him. He reveals that as a child growing up both in Busia and in Nairobi, he would follow mourners just to have a chance to see the dead.
He would also visit City Mortuary in Nairobi when he was a very young boy of around 11 years old, pay KSh 50 (N148) and go view corpses. “I would follow a body just to view it or sometimes, I would hear that someone has been killed and if I don’t see the body, it would be a nightmare if I do not view it. That was when I would only be satisfied and it would also help me from being ‘haunted’ by the image of the dead,” he says.
The entrance to the Chiromo mortuary. While other human beings are disturbed by seeing cadavers, Chebii says he finds closure after viewing them.
At Chiromo, he deals with chemical preservation of bodies, helping during post mortems, reconstruction of decomposed or mutilated bodies, cosmetology among others. But how does he juggle between the mortuary and the studio?
“To be honest, work here takes much of my time but I get time to record in studio mostly in the evening, being a mortuary attendant is a calling and music to me is a conviction,” adds Chebii. Meet Subisuso Chebii: Mortician by day, musician by evening.
“There was a time a two-year-old boy whose father had died insisted on seeing the body and he was so insistent that I had to take him in. On seeing the body of his father, he began asking his body why he had to die that early and leave him..that moment broke me and I had to walk out,” he recalls.


All in all, Chebii says he enjoys what he does and believes his is a calling which he has no regrets of.

Posted by mediacop
Labels: news
Email ThisBlogThis!Share to TwitterShare to Facebook
at 07:14