Menu
Home » news » UNBELIEVABLE!!! Mortuary Attendant Reveals The Most Scary Things They Encounter When Dealing With Dead Bodies Inside Mortuary

UNBELIEVABLE!!! Mortuary Attendant Reveals The Most Scary Things They Encounter When Dealing With Dead Bodies Inside Mortuary 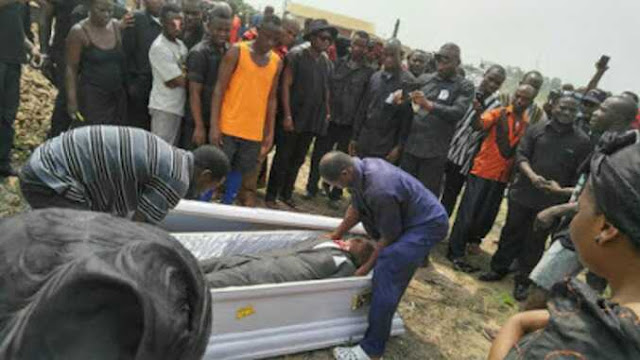 THE proprietor of Emeka Mortuary, Okunmi Community, located at the suburbs of Ikom, Central senatorial district, Cross River State, Mr. Kalu Ben Chima, popularly called Emeka Ambulance, has revealed the spiritual combats morticians, now and again, go through with occultists and members of some secret societies before their corpses were embalmed in his mortuary.
The Arochukwu-born mortician, whose mortuary is located along Ikom-Calabar highway, confessed to NDV that dead bodies, especially those of occultists and members of secret societies “do give us trouble while being embalmed because their bodies have been ‘fortified’ by the devil or some spiritual forces.”
Power pass power
“In such cases, we have to pet and persuade them by talking to them to allow the chemicals to penetrate their bodies, but if they remain stubborn, we have to employ our own spiritual force and of course, power pass power and we can then embalm them,” he disclosed.
According to him, he learned the trade in Onitsha General Hospital, Anambra state, and had come to know that some dead bodies were so “powerful” such that they do not allow others to lie close to them and he was always careful when attending to such bodies.
Some corpses don’t allow others to lie near them
His words: “Some powerful people do not allow other dead bodies to lie close to them, so in the night, they will remove other bodies near them and dump them far from where they are or they would go to an isolated place and lie there – all dead bodies are not the same, which is why we knock before we enter there.”
Mind-boggling tales

Our reporter traveled from Calabar to Okunmi to meet Mr. Chima following some strange reports about corpses in his mortuary established in 2010. A few months after it was established, there was an unsubstantiated story about a man, whose car broke down close to the mortuary late in the night and he decided to seek for

A security guard reportedly came out and gave him a mat to sleep in a section of the room, only for him to wake up the next morning and discovered that he slept among corpses and he instantly passed out.
Another case was that while conveying a corpse, the mortician occasionally walked behind the ambulance, while the corpse drives the van and the bizarre- that he sells body parts of dead people and so on. Chima confirmed some creepy stories and described others as hearsay.
On the man who allegedly slept in the mortuary with corpses, he said it was not true and he does not keep security guards in the mortuary.
Corpses still have spiritual powers
His words: “The corpses may be dead, but they still possess some spiritual powers to protect themselves. We have about 100 corpses right now and 18 abandoned ones, but we keep the place open, both day and night, without any security and anybody, who attempts to do anything funny by going there to steal or do anything has himself to blame”.
He, however, described as false claims that some people sell parts of dead people or do have s*x with them.
S*x with dead, a deadly affair
Chima asserted: “Do not think that because she is lying down there, she is finished and you can go and have s*x with her. You will die also in a matter of hours or days and how can someone sell body parts of a corpse or water used in washing a corpse, such water is poisonous.
People die from different ailments such as HIV/AIDS, and water used in washing their bodies is poisonous and any person who uses it will either die or contact sickness.”
On the report that he has rented crowd of women, who engage in bogus weeping when a person dies, he said the women were part of a specialized funeral services he offers.
Some people hire mourners before their death
He explained: “Some people do not have people to cry for them when they die, so they will arrange with us while they are alive to get some women to cry during their burial and also, some people because they are polygamist would arrange with us to organize the casket, grave, and mortuary services so that when they die, there will be no struggle among family members on who to do what and so on.”

Posted by mediacop
Labels: news
Email ThisBlogThis!Share to TwitterShare to Facebook
at 06:40